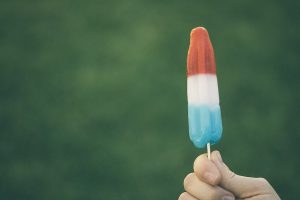 I remember sitting with my mother in the common area and she kept pointing to her tongue. I didn’t know what she was doing. I was agitated. And I went and got a nurse. I couldn’t deal with it after I got her water and it did nothing. The nurse said, “O, it’s popsicle time.” I didn’t think my mother knew what was being said, but there was something in her eyes that looked elated when she heard the word popsicle. The nurse said, “One second. I’ll be back.” I didn’t know whether or not to follow the nurse (wasn’t it rude to be silent, essentially asking her to come back?) or sit there. If I have a choice between two possibilities, I almost always choose the one of inertia. Which is one of my many tragic flaws. I’m afraid I’ll get lost somehow. Several minutes passed, and I felt bad, I felt that I was treating the nurse like a waitress, which I didn’t mean to do, but I did. I took my mother’s hand and there were all these elderly men and women circled around the nurse, reaching for popsicles. One almost knocked the box out of her hand. The nurse saw us and smiled and waved to another orderly who passed out the rest of the popsicles. The nurse then waved to us to go to another room and there was a little fridge. There was ice cream inside. My mother shook her head, no. She almost looked violent. The nurse you could tell was hurt: she tried to make us feel special. I felt bad for the nurse. I felt worse for me: I wanted the ice cream. I actually hate ice cream. But I wanted to feel special. Like it was a celebration. And I hated my mother at that moment. I hated her. I thought, Just eat the fucking ice cream. The nurse started to get up, but I said, “I’ll get it.” And I went and got my mother a popsicle. And then I came back and she shoved it in her mouth. She was slurping. The nurse gave me a small bowl of chocolate ice cream. It was such a small bowl I wanted to cry. I thought, She is going to use the rest of this ice cream on another mother and son who will appreciate it. And when she tells the story to someone else, maybe her own mother, they will laugh at me and my mother who had no appreciation for the kindness. And I looked at my mother who started to gag on the popsicle. And I thought, serves you right. But then a moment later, I felt bad. She looked like she was going to throw the popsicle on the ground. And if she did, I couldn’t bear it. So I took the popsicle from her hands and licked it. And it was better than the chocolate ice cream. I hate chocolate. I hate ice cream. Nothing is worse than chocolate ice cream. But I liked the popsicle. I don’t know if I actually did. But the popsicle was cold. I liked it for that reason. It felt like it was going to burn my tongue.