Translated from Farsi by S. Ganjbakhsh

In 1850, during a religious civil conflict, a sixteen-year-old girl called Zaynab who was skilled in martial arts had to cut her hair and fight in men’s clothing. She was even given a male name, Rustam-Ali. Finally, she was shot to death by bullets targeting her from all sides.

The resistance, to her, was as much significant as the authority of the patriarchal society and, at the same time, it was against such an authority. Maybe, this has been the case for all the women who have fought in men’s clothing.

There were fifteen of us in the morality police’s van. They had arrested us at the subway’s exit. Equipped with catch poles[1] and electric shockers, they often stand in places where you cannot see them or escape from them. There was a metaphorical symmetry in that we were arrested near Enghelab [Revolution] Square in the heat of a summer evening with the orange light of the sun breaking its way through the windows of the van which was, all in all, poetical and dreamy. Inside those vans, all human achievements decay; ethics, logic, philosophy, and even poetry. 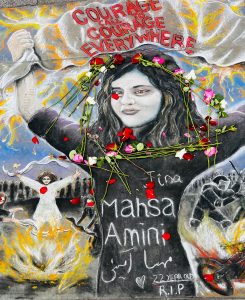 On the exit steps of the subway, a veiled woman with dark skin and eyebrows tattooed in purple stood before me. She pointed to the van, saying: “Get in… Hurry up… Go…go…go.” I tried to see the dynamic and horrible scene of that spot at a bird’s eye view of the woman and myself. Women pulled their headscarves over their hair while running, and men escaped the scene hurriedly as if having seen nothing. I myself have experienced such ignoble and contemptible escapes many times. It is not just about fear of intervention in such situations. Witnessing scenes like this reminds us of our national inner helplessness as well as our personal moral impotence. Who under the blue sky can bear to see it?

The woman was holding my arm and we were moving towards the van. What was I looking for in her face? No tinge of pain or sympathy could be found on their faces and it was because, after too much pondering being indifferent or being obedient, they had all decided they had better do what they were doing as a duty. She kept repeating that my headscarf had fallen off my head and that I had some rips in my jeans. After all, Kafka taught us that the inability to understand one’s indictment – especially when there are no offenses – can be a new offense itself.

When she found me at a loss for words she pushed me inside the van.

Maybe now the world has come to know that any sort of quarrelling on such occasions ends up with the use of catch poles and electric shockers[2]. That day, it happened to a young woman who denied getting in the van. She was shouting that there was nothing wrong with her blue shawl and cream manteau[3]. One of the male officers finally managed to use his toy. I remember well when the catch pole’s stroke landed on the woman’s waist and all of us screamed inside the van. That scream was the most human thing we could feel in those moments. They forcibly pulled the woman inside the van, and got in themselves. Chaos had exhausted them, but torturing was satisfying them. This was true, at least, for that evening. Now, there was only the red sun and the engine of the van roaring down the street. The sound of normal life from the outside world touched the skin of that body of humiliation and suffocation, and returned to the city. Life had a horrible sound, more horrible than death….

The van entered a Basij center and the big green iron gate closed behind us. Again, the young woman cried out that they didn’t have the right to arrest her because her manteau’s buttons were undone. They forcibly took her to the hall where we would all spend the next two hours. Green walls… The same color they had bought for the gate… Everywhere you looked there was repetition and nothing more. The shoes and clothes of female officers and their black veils… An unfulfilled barracks instinct… We were there because we had not accepted repetition.

It would be problematic for such a system if it fails to reduce the nation to a barracks mental complex.

Such a government, like the one that is ruling now, would even start arresting and killing school girls if it is defeated by the uniformed school students who have been forcibly made uniform.

I sat next to the young woman who was crying now. She asked, “What are they going to do?” They took us to another room one by one. I said they would make a case against us and tell us to call someone in our family to bring clothes for us, clothes like their own or rather clothes that they favored more: black-colored, long-sleeved,  loose-fitting, and lengthy manteaus covering legs down to the ankle, buttoning up the front of the body all the way. The woman cried again and said, “I can’t call.” She said her husband was stricter than those officers and that he didn’t know she had bought that manteau. In Iran, women sometimes wear some clothes without their husbands knowing about it. Just like the right to divorce, the right to choose what to wear is only had by men. You might be wondering what would happen if a woman does not comply. Men, fathers or husbands, are women’s blood-redeemers and, in most cases, they are not punished even if they kill their wives or daughters.[4]

The longer we stayed there, the bigger our anger got than our anxiety. They called my name. In another room, they put me next to a wall. The female officer pushed my unbuttoned knee-length manteau aside with the camera in her hand. She asked me to bend my knees so my body could be seen through the slits in my jeans. She pulled my headscarf on my shoulder. Nowadays, when supermodels write about Iran, I think to myself that they are unable to even imagine such a pose for photography. They took my details and allowed me to call my mom.

In the hall, I told the young woman that she did not need to call her husband. Half an hour later, they gave me the manteau my mom had brought for me to wear on top of the previous one.

Now, I looked like them. So, I had permission to go out through the green gate behind which my mom was waiting with several other moms.

I see the same face that I saw when I was four years old while they were arresting her in front of my eyes in our neighborhood because of her hijab, begging our neighbors to take care of me until she came back. A pale face with red rings around scared eyes… I took the other manteau that she, at my request, had brought for her. I went back and told the soldiers at the gate the name of the young woman. I said I was her sister and that I had brought her a manteau.

A few minutes later, the woman came out. My anger was still there but my anxiety had changed places with a warm strength. The woman, crying, asked my mom if she could give the manteau to another woman in there. It was not at all surprising that, other than her, there were other women inside that could not call their families for similar reasons. My mom went to the gate, called the name of another woman, and gave the manteau to the soldier. They could never ever figure out it was the same manteau. That was what they wanted: Sameness. And, we were confronting them with their own goal.

That day, three other women came out using the same black manteau and they went home in their previous clothes, maybe before their fathers or husbands got home.

While, in the detention center, they tried to create a forced unity by creating similarity, the thing that gave us that small but unbound unity was our differences.

If I stand on the hilltop where Zaynab once stood and watch until today, what will I see through smoke and fire and blood spatter? Hundreds of passionate people who are still being “shot to death by bullets fired from all sides.” I see that once she wore men’s clothes to fight along men. I see that my mom’s generation had no resistance. I see that, a few years ago, we women came out of their detention centers in their own clothing. But I also see that today in the streets of Iran, every woman fights in her own clothes, cuts her hair for a female and humane unity, and fights under her own real name against centuries of oppression of women throughout the world.

[1] A long pole with an attached noose at one end, used for controlling animals. Similar devices were once used for capturing and controlling criminals during medieval times.

[2] Especially after the incident, just a few months ago, when at the entrance of a sports stadium the officers used pepper sprays and tear gas to prevent girls from entering. Women do not have the right to enter stadiums in Iran.

[3] A long light overcoat or rather a tunic or robe that Iranian women wear on top of their usual clothes to cover their bodies for the purpose of complying with the country’s hijab regulations. Generally, manteaus are like trench coats or rather lightweight parka coats and they come in a wide variety of shapes and colors.

[4] For instance, the man who cut off his young wife’s head and went about the city with her head in his hands last year, and the father who killed his baby girl by raping her were both released.

S. Ganjbakhsh is an Iranian literary translator. She lives in Sanandaj, Iran, where she is a high school English teacher.

A. Cohan is an Iranian writer and critic. Cohan lives in Tehran and is the author of some novels and essays.