Even now there is the desire,
but what to do
after Jan. 6—
the militias and the “boys,”
their guns and zipties, crude noose,
what they call “revolution” (noise)—

we know that current conditions
are not conducive
to the use of the gun,
our revolution would be attacked,
countered, hacked, coopted, hijacked
by white-supremacist reactionaries
whose rage against reality
is rampant and rabid— 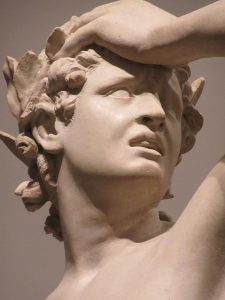 (if white)
we might argue
To Fellow White People:
now is the time to divest, to live
among your fellow human beings
to cede power, the certainties
we have clung to,
what we have hung on our whiteness,
what we thought we gained from it,
like of the pain of a childhood smack,
don’t go back to what has been
beaten bitterly into you,
the fevered, teeming phobia
over power/control—

we could say to them:
White People of the World,
Unite . . . with the World!
You have nothing to lose
but your anxiety!

—but we know now it won’t work,
like at the BLM protests
last summer, police
kneeling with demonstrators one day
tear-gassing them the next,
slashing their water supplies
into leaky heaps,
and then it was some police
who opened the doors
to let in the terrorists
to storm the Capitol—

their war, it is true,
is against the imagination,
and that ultimately is for
what we fight—

but such people are set on their course
and though we could arm ourselves
in defense against the nonsensical,
their derangement and bloodlust,
guns will likely not win it—
if large segments of the state’s
armed wing are willing
to go in on the underhanded plan,
then we know we are in danger—

weren’t we always?
and some more than others?
the freedom ruse
only further exposed?
and that their “revolution”
is only the old norms,
for when white men don’t get their way,
then there is hell
(Heil!)
to pay

Diane, what then is there to do?
to struggle, yes, keep on
elaborating
our intrinsic existing poetics/
a poetics of existence/
to keep on making it
with each other,
to observe the orphic openings
between
stillness/movement,
the poem
a thinking through
movement

Note: In di Prima’s “Revolutionary Letter #75 (Rant),” she has the lines, “the only war that matters is the war against the imagination,” and “there is no way you can not have a poetics / no matter what you do. . . .”

Michael Begnal is the author of Future Blues (Salmon Poetry, 2012) and Ancestor Worship (Salmon Poetry, 2007), as well as the chapbooks Tropospheric Clouds (Adjunct Press, 2020) and The Muddy Banks (Ghost City Press, 2016). His work has appeared in journals and anthologies such as Notre Dame Review, Poetry Ireland Review, Empty Mirror, ISLE: Interdisciplinary Studies in Literature and Environment, and Thinking Continental: Writing the Planet One Place at a Time (University of Nebraska Press, 2017). He teaches writing at Ball State University and can be found online at www.mikebegnal.blogspot.com