Rion Amilcar Scott Is an MC’s MC: An Interview by Reginald Dwayne Betts 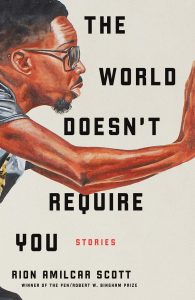 Rion Amilcar Scott is an MC’s MC. He creates the kind of imaginative landscapes that seem so real you wonder why you haven’t been paying attention to the world in the way that he has. But I gotta confess. I slept on his first book; the collection of stories appropriately named Insurrections. See, Rion is what you call a good dude. As hilariously funny and sincere in person as he is on the various social media spots where writers hang. I was afraid that the book wouldn’t live up to the hype of the person. So, I read Insurrections late, more than a year after it was released. Months after it won the 2017 PEN/Bingham Prize for Debut Fiction. But good writing, like good whisky, ages well. And Insurrections didn’t disappoint.

Off the first read, me, a PG County native (that’s Prince George’s County, Maryland for y’all folks that don’t know), was so fucked up that I started looking for Cross River on the map, beefing again with high school teachers that I figured had, once again, kept part of my history from me. And I looked, even knowing the whole thing was invented whole cloth – cause Rion writes it so well that invention becomes fact. I swear, I searched for Juba, a character in the eponymously named short story, in Wikipedia. See, Juba is a compendium of the truest details. The story begins with police officers taking the narrator for a man named Juba that they swear sells marijuana – and ends with the narrator actually finding Juba, the man the cops were looking for, only to learn that he is a Negro-savant busy working on one of the most brilliant undercommon scholarly ideas ever. I ended up looking for a Juba for the same reason that I searched out Cross River, our histories and mythologies make us, and Rion Amilcar Scott has been a world to carry us through this one.

Scott’s The World Doesn’t Require You, picks up where Insurrections pauses. The first phrase of the book, “God is from Cross River,” is the kind of thing an entire ecosystem is built on. And not for nothing, the book makes you realize that perfection don’t never mean without flaw. Which is to say that these characters, the entire gambit of them, are working things out and often failing. The Nigger Knockers is what gets me. It’s partly cause the title is something I should avoid in integrated spaces – but also, the story is about how figuring out how to live in integrated spaces conflicts so many of us. One way to explain the story is to say that it makes something existential out of a childhood prank. Another way is to say that there is an entire unwritten history of black folks figuring out how to intellectualize everything that they have done to survive that has failed.

Call it what you want, but the writing of Rion Amilcar Scott is a godsend. Maybe God ain’t from Cross River, but what Rion writes is from somebody who loves us. These questions ain’t nothing but a teaser. When it is said and done, I need to sit down with my man in a quiet room and record the way his mind works. Until then though, these questions and answers are a start.

Five Questions with Rion: An EP 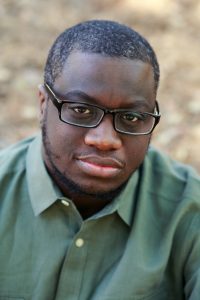 1. This question is probably simple, but the invention of place, of home, damn near of country, isn’t an uncommon thing for any writer, let alone a black writer. But for most, the invention seems driven by the desire to create a space for the story to take place. But tell me, am I right, that for you, Cross River creates the possibility of narratives that cannot otherwise exist, narratives explicitly tied to the actual experience of black folks here?

Cross River is this gigantic sandbox. It creates so many possibilities. Damn near every time I write a story I create an element that I know I can bring back and match with an element in another story in the future. It’s funny to see people say that I’m so good at creating and using a setting. The invention of Cross River was partially because setting was the weakest part of my game by far. I’m a big fan of essentially ignoring your weaknesses until you really need them and playing to your strengths–which is why I usually have a lot of dialogue–but I didn’t want to leave setting behind so I made it central. I can’t ignore it now with Cross River as my home. And I have to recreate it in every story for it to make sense. Cross River is made out of words, but it’s really made out of my understanding of black folks’s cultures and desires. I wanted to put a remix of our history at the center. Like why do we have to dream and wish that the confederacy won? I don’t want to work forward from that bullshit. I’m glad they lost and I wish white supremacy took more losses and I’m hoping it takes more losses in the future.

2. This new collection is dope. I appreciate you writing it, which is really a fucked up thing to say to a writer. A fucked up kind of demand. And it makes me wonder, how do you grapple with the kind of expectations that come with writing about people who are invisible – and not Ralph Ellison invisible, but Juba invisible – as in, nigga, we kin and you don’t even see me see me.

3. Great books gotta have great first lines. “God is from Cross River, everyone knows that.” That there put you in the pantheon. Though, to be honest, since this is a collection of stories the bar was high – each story had to come with it – both the entire joint and the first line. This is my weird obsession. Like I literally fucking read the first line of each of your stories successively. They all come with it, except that robot joint, which does come with it, but you can’t know at the first line what will follow, can’t place footsteps and metallic are in the same sentence. Anyway, I should ask a question: Do you chase that first line? Does it come before the rest of the story, after?

That first line in “David Sherman” definitely came before the story and informed what the story would be about. I knew that sentence had to be the beginning of the book. It could be at no other position in the collection. I held back “David Sherman” from the first book because that book already had an opening story. It helps to have a dope opening line in a story because that can shape almost every part of the story. In my first book, I wrote the sentence “In my eleventh year, my father taught me defeat.” Nearly everything about the story was in that sentence. All I had to add was the vehicle for the lesson that would follow (chess) and the gender of the narrator (it turned out to be a girl). I don’t know if I’ve written a sentence like that again. That story, “202 Checkmates” came out nearly fully formed. I added a bunch of stuff during revision, but I went back and took out most of the stuff I added because it was just clutter. The sentence dictated exactly what that story would be.

4. Talk to me about the title of this collection. I appreciate all the ways that the book informs the title, except, I don’t know – I finished reading it and thought man the world requires Cross River. Just like when I read Insurrections, I literally went to a map looking for this spot. So tell me about the title.

I want people to come with their own relationship between the title, the book and themselves. Some people see it as a depressing idea. I don’t. I see it as a hard truth. No one is so important that they can act any way toward their fellow human. To believe so is to, in one way or another, court destruction.

5. We’re writers right. And I dig that, like the story and all that shit. Actually, I mostly dig writers that make me want to do what they do. And so I give you props for that. But the thing is, what is joyous and sacred and fucked up about the story, any one that I return to, is that it reminds me of why I might weep. So my question, what makes you weep and does it at all relate to what you write?

My mother’s gone and I want to accept that, but I can’t really so I’ve been weeping about that frequently. Recently waking up to tears already in my eyes. I don’t know what I’d be weeping about if I had a mother. I’ve never known grief like this before. I want it to seep into my work, most frequently though it’s stopped my work. When she died in March, I figured I’d throw myself into my work, but I don’t know, some things overwhelm the work. It’s coming out a little bit, but I have to write more to see how my mother lives in my work more than she  has already. I mean, she’s always been all over my work, just like all my immediate family. I’m trying not to weep right now as I type this actually.

Rion Amilcar Scott is the author of the story collection, The World Doesn’t Require You (Norton/Liveright, August 2019). His debut story collection, Insurrections (University Press of Kentucky, 2016), was awarded the 2017 PEN/Bingham Prize for Debut Fiction and the 2017 Hillsdale Award from the Fellowship of Southern Writers. His work has been published  in journals such as The New Yorker, The Kenyon Review, and Crab Orchard Review among others.

Reginald Dwayne Betts is the author of four books. His latest collection of poetry, Felon, was published in October 2019 by W.W. Norton. He holds a J.D. from Yale Law School.