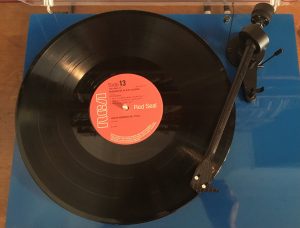 This inch-thick, square box was familiar from my childhood: the sturdy, waxy cardboard, its paper cover glued onto the top of the album set like a fifth-grader’s découpage. I used to open these boxes like gifts, lifting off the lid to reveal the contents wrapped safely in tissue-paper sleeves.

So as I raised the cover off this box, which once belonged to my partner Paul’s father—corners scuffed, not dusty but with the scent of dust lingering—and I held up a heavy black LP from Rubinstein Plays Chopin, the moment already contained layers of my own past, as well as the past of a family to whom I am, after nearly twenty years, relatively still new.

I decided not to listen to Side 1 first, but to put on the record that happened to be on top—the one I imagined had been most recently played.

That slight puhf of a record player turning on; the careful eyeing as I brought the needle over to the edge of the record; the lowering then crackly landing of needle onto vinyl.  Then Chopin—nocturne, in B-flat—the delicate melody loosing me from time.

Listening to Rubinstein’s Chopin became one of my antidotes to this past year—we probably all have them—a palliative to the pandemic, to the overwhelming political news, to the shut-in-ness of teaching from home and seeing friends only on Zoom, to virus worries undercutting the lockdown excitement of my weekly trip to the greengrocer near where I live in Cardiff, Wales. And we’re not exactly out of the woods yet. As I begin to ease back into a semblance of life tempered by Covid instead of dominated by it, traveling to Florida to see my father for the first time in two years, and sitting outdoors with friends at restaurants, there’s the new Covid surge, and then the news from Afghanistan. In my own family, my brother-in-law isn’t vaccinated, nor his son and daughter-in-law. I worry about them and their daughter, too, a vibrant, playful, sassy three-year-old.

As a writer, I sometimes wonder why I do what I do. But as I listened to Chopin that morning, the first notes lilting into the air, into my brain, before flurrying into a surprising new place, transporting me, I knew again that beauty is a balm. Art has a place.

Discovering the Chopin was accidental. I’d come back from running one morning and felt the need to refuse the call of the BBC’s morning news program. Paul was visiting his mother, who, at 94, her weak heart weakening further, her macular degeneration worsening, needs a bit more help these days. I was on my own, needing company. Music, classical maybe? I don’t really stream music, and I was tired of my own tired collection of CDs.

Then I remembered we had several shelves of albums that Paul’s father had owned. Why hadn’t I explored those yet? I went flicking through Bach, Beethoven, Dvorak, Schubert, then saw this thick collection of my favorite composer, Chopin.

Moody and mellifluous despite the spitting needle, the nocturne sounded through the room.

Was Paul’s father the last person to hear these tracks? I’d never met Eddie, who’d died more than thirty years ago of a chronic heart condition, just heard countless wonderful stories about him. His narrow face and wide smile, in black and white, still grace Iris’s sitting room in Swansea. A steel worker turned Baptist preacher, his vocation did not inhibit his sense of fun. Weeks spent preaching in France prompted him to develop a fondness for French wine. He turned off TV shows with content he didn’t approve of—unless he couldn’t help laughing himself.

Now, it was almost as if he was in the room. I knew he had listened to this exact sound.

The next morning, and then for several weeks running, Paul and I paused together at breakfast every other day or so, turning off the radio and our devices and listening to just one album side. We weren’t choosing albums but taking them as they came, putting on the odd-numbered side (say, Side 17) then the even side (Side 18) the next day.

The album set comes with a booklet of liner notes, written in overwrought ’70s classical music prose. On the back is the list of songs, and we noticed that some of them had a small “x” delicately pressed in blue ink. Paul’s father’s favorites? I ventured. Or maybe, Paul said, his mother used to play those pieces on the piano.

He was right. Iris would have difficulty playing these now—arthritis limits the movement of her right pinky—but they make an impressive list: Ballade No. 4 in F Minor, Impromptu No. 1 in A Minor. Now, when we listen to one marked with an “x,” we can hear not only the sounds from the album that Eddie and Iris listened to, but also the echoes that Eddie heard, too: Iris playing him that nocturne by Chopin.

It was, we learned, not Paul’s father’s box set, but Iris’s—a gift from Eddie for her 60th birthday.

Chopin contains echoes from my own childhood, too. As the fifth child of a World War II generation family in Connecticut, a family who was finally, by the time I was ten or so, no longer worried about making ends meet, I was spoiled with luxuries my older siblings hadn’t been given, including, when I was about twelve, a stereo.

It was nothing elaborate—an all-in-one radio and record player sold with speakers. I’m sure my parents bought a Zenith because Zenith made good TVs. And it became the house record player, although it was kept in my room.

My father began buying classical albums, especially piano music, especially Mozart and Chopin. Many afternoons, I’d come home from school and the albums and sleeves he’d been listening to would be splayed across my bed, and sometimes the music would still be playing. I loved Chopin especially; it’s no accident that my first short story in graduate school revolved around Chopin’s Waltz in A Minor. One note in the melody is so low in the bass, it’s almost silent.

In Wales, I put on the last album side I have left to hear from Rubinstein Plays Chopin. It happens to be Side 12 and, like the first I listened to, nocturnes. Paul has left again for his mother’s; Iris’s eyesight has deteriorated, and she is seeing a surgeon tomorrow. In Florida, my own father, also 94, is anxious about getting the results of a CT scan on his lung, though his doctor is not worried. And then, the crackling needle, and Chopin fills the room, lush as roses. A faint x tells me Iris used to play the third track (Op. 62. No. 1 in B). As I imagine her playing for Eddie, I am carried at the same time to a porch with my father, nighttime, the summer after my mother died.  My sister is there, too.  We’re rescuing old photos my father’s about to throw away, crickets rhythmic under our voices as we devise our own nocturne.

Carole Burns’s collection, The Missing Woman and Other Stories, was awarded the John C. Zacharis Award by Ploughshares. Burns also writes book reviews and author interviews for The Washington Post. Her non-fiction book, Off the Page: Writers Talk About Beginnings, Endings, and Everything in Between, published by W.W. Norton in 2008, was based on interviews with 43 writers including A.S. Byatt, Anthony Doerr, Edward P. Jones, and Jhumpa Lahiri. She’s head of creative writing at the University of Southampton in the U.K.