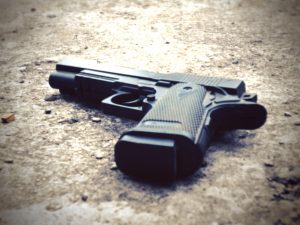 Joe Bishop’s high school English teacher posts on Facebook that the body cam footage of his death is no better than a snuff film, and the cop responsible should go to prison for murder. This post ends her relationship with her sister and several of her friends who respond to the post with #AllLivesMatter and #BlueLivesMatter. The teacher never speaks to them again. The viral video of the young man’s death begins with a foot pursuit of someone they think might have broken a car window down a dark sidewalk. The image jumps and dashes, chasing a hectic spotlight. There is shouting. There is the flap of a black hooded jacket disappearing over a fence. There is a tall redwood fence enclosing a postage stamp yard of grass and a man-shaped shadow cowering by a stucco house wall.“Hands up. Hands up.”

The English teacher watches this video footage, which the police have released to the public in accordance with the new law. The teacher sits on the couch in her living room while her blond son sits with his Legos on the floor. She listens to her student die through her headphones and she flinches with each blast. Her son stops the clicking of plastic blocks in primary colors and stares at her with the stillness of a ghost.  The next day after school, the English teacher links arms with several of her students and marches on the streets of downtown, blocking traffic and boarding the freeway onramp on foot within a massive crowd that undulates and surges, halting rush hour traffic and forcing miles of commuters to stop in their lines and wait while the protestors spend a little of their pain only to find that grief has no end.

Say his name, they yell to the drivers, to the cops standing by, to each other, to the sky.  Say his name.

In the body-cam footage, the white cop holds his gun on the quivering huddle for sixty-seven seconds after firing the last shot. At sixty-eight seconds the body cam moves in on a young man curled like a fetus on a concrete patio.

A pool of light settles on the curved fingers of the young man’s hand and in its palm rests a cell phone with a dark screen.

The body cam goes dark. The sound quits. The cop with the trigger finger and the body cam has turned off both video and audio, though he knows he is not supposed to, and hangs back as his colleagues kneel by the young man, their latexed fingers coming away from his neck and wrists slick with blood. The cop imagines himself strapped to a Ferris wheel at a night carnival. He is dizzy among the lights and swirling noise. An ambulance siren wails and red lights cycle over the stucco and redwood and a woman screams from within the house. The cop hears the keening of the grandmother of the young man he has killed and her voice pierces his eardrums even through the stucco and the drywall. He wishes to cover his ears but that would look weak, so he hears her say the young man’s name again and again and again.

Better come with me, says the captain who pushes him to an unmarked car and takes him to the station.

It’s okay, the chief says and asks the captain to bring them coffee, and as they wait he says the lawyers are on the way and this comforts the cop. He says, the grandmother was inside, waiting for her grandson to come home. She heard the weapon expel but she did not have visual on a goddamn thing. This will be a matter we’ll deal with one day at a time. Just take my lead, son.

The cop nods and sits with his back ramrod straight and in his head he says yes sir, but when he opens his mouth to speak, he thinks of the young man’s open palm and he says his name.

Excuse me? The chief’s head clicks to the side.

Yes, that is the suspect. That is the name of the deceased, says the chief.

The cop closes his mouth where the name of the young man he has killed wiggles on his tongue. The cop clears his throat. He coughs into his hand. He runs to the restroom and vomits into the sink.

The lawyers arrive and the cop returns to the room with the long table and he screws up his concentration into a tiny tight ball of rubber bands that he pictures ejecting from his tongue but when he parts his lips to let it go, the justifications and explanations he had planned to say fall away in a thousand snapped pieces.

The chief and the public relations lady and the lawyers for once are quiet while the grandson’s name seems to turn into a sparrow that flies over their heads and brushes its wings against their cheeks. The public relations lady ducks her head as if to avoid it, and the chief frowns at her as though she has done something to embarrass the lot of them.

The cop’s fingers burn where he gripped and pulled twenty times not three hours before. He wrings his hands under the table.

The lawyer in charge says, that’s enough, and he bangs on the table with the flat of his hand. Everyone rises. The chief takes the cop to another room where they wait for an hour for the psychologist to arrive. While the cop waits he studies his hands and thinks that this isn’t happening. He tells himself to snap out of it. He tries to laugh and out comes the sound of a dying person trying to breathe through lungs shot full of holes.

“How are you feeling?” The psychologist is almost as young as the cop. He is bleary and stubbly because it is the middle of the night.

The cop wants to answer. He wants to please the doctor and show he’ll cooperate with the investigation.

“What would you like to say?” the psychologist asks. “Can you talk to me about what happened tonight?”

The cop cannot. He can only repeat the echo of the grandmother’s call for her grandson. Her voice still rings in his ears.

“I’d like to help you,” the psychologist says but no one can help the policeman now, not even the doctor.

The psychologist eventually leaves and the chief takes the cop home in his own car and the street is silent and steel blue in the early morning. The cop slips into bed beside his fiancée and spoons her. He buries his face in her hair and neck and thinks, she’s mine, and says his name.

“Everything okay?” The fiancée’s voice sounds like she’s under water and she might not even be fully awake yet.

Two years later the cop is not a cop anymore and not a fiancé. He’s not anything but a man living in the one room in-law unit with its own sink and toilet in the back of his uncle’s property in the mountains. He goes out the front door of the shed-sized house and breathes deep the thin clean air and watches a squirrel tuck a nut into the trunk of a lodgepole pine. He takes another deep breath as he has done every morning and tries. He tries and as the morning before, and the morning before that, he can think only of one name. He doesn’t speak. He wedges the snout of his own Smith and Wesson under his tongue and shoots.One hundred miles away down the valley, the English teacher bites her tongue hard in the middle of a lesson. Her students watch as she spits blood into the trashcan.

Three blocks away, Joe’s grandmother holds Joe’s three year-old son on her lap in the morning light that slants through her kitchen window. She presses her face against his smooth round cheek and says into her beloved great-grandson’s ear his own and his father’s name, “Joe Bishop…Joe Bishop…Joe Bishop.”