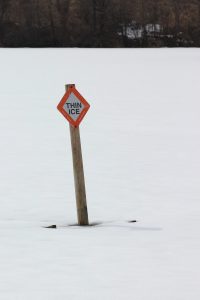 My mother is sick, my best friend was dying; I had to travel quite a bit this winter—Vermont, North Carolina, Minnesota, Oregon, Massachusetts. And yet the way chain stores nudge a landscape into a kind of global uniformity, there was a correspondingly odd unnerving sameness to the weather: it would either be colder or warmer than usual, temperatures often spiking and plunging to dual “record breaking” poles during the same trip.

Our annual December holiday trip to Vermont was all rain and warm mist, leaving the ground soupy; it smelled like spring, which brought to mind Bill McKibben’s eerily prophetic words from 1989, “I love winter best now, but I try not to love it too much, for fear of the January perhaps not so distant when snow will fall as warm rain.”

I grew up in northern Minnesota, a town called Hibbing, where the winters were so locked in with endless snow and cold, the local bard-poet, Bob Dylan, declaimed, “Eight months of that…You can have some amazing hallucinogenic experiences doing nothing but looking out your window.”

The arduous slog of winter, especially once the sparkle and fizz of the holidays had passed, thus dramatized the turn of the calendar when March turned over to April: the recognizable softness in the air. The emergence from the freeze felt earned, which made the season all the more glorious: the Olympic medal for our pioneer stoicism for enduring the long winter. As kids, we leapt from second-story windows into seven-foot snow banks. The banks reached so high that plowing them made our driveway look like a white cake from which a deep slice had been removed. They would eventually shrink, and the snowmelt running down the street seemed deep enough to fish in. Spring was indeed a time when everything seemed possible.

In the roughly forty years since my childhood, everything has changed. The National Climate Assessment has declared Hibbing an epicenter of climate change, bearing the most rapid rise in temperature in the nation. It’s a staggering three degrees higher now on average than it was when I was a child, reflecting an odd but consistent global pattern in which Arctic and northern latitudes warm faster than their southern brethren.

Lake ice that used to be reliably frozen by Thanksgiving now never completely freezes over; you need a good foot of ice to safely tow an ice-fishing house onto a lake via truck. Scanning the hometown paper, I regularly see news of houses and trucks and snowmobiles plunging through. This is a new way climate change kills: an eight-month-old baby drowning with her parents in a car driven on a lake; perhaps her parents were people merely living according to what they knew, but not what’s there now—the rug, and the ice, pulled out from under them.

Besides the harm climate change brings to our area—longer hay fever seasons, increased Lyme disease because the ticks no longer die over the winter, flooding, property damage, death by thin ice—there is a larger death: that of the comfort of the slow, predictable move of the seasons. Things that used to be separate, like summer thunderstorms and winter snow, now come together as “thundersnow” in February. I visited Minnesota during what was called the “Polar Vortex of 2019.” My suitcase still bears traces of mud from when I dragged it through a parking lot submerged in snowmelt on the day I left, in February.

For my Hibbing friends, there is no longer a seasonal ritual of putting away the woolens and long underwear and snowmobile boots in exchange for the lighter, brighter spring fare. A friend reported “a false sense of security” this spring; the usual melting followed by an April “snowmageddon,” as all alarming weather events need to have cute, half-explanatory names that ignore the other half: climate change.

The odd April snowstorm has occurred in Hibbing before, but in my memory it was brief flurries that we would gawk at before it disappeared—never this late and this hard. The cover picture of the Hibbing Tribune shows a man shoveling out his driveway and unearthing a bicycle that had been trapped, Pompeii-like, victim of the previous day’s belief that it was finally, irrevocably spring.

Even our December trips to Vermont that I secretly looked forward to each year for twenty years, a few days of reveling in truly cold, Minnesota-like winter, are now just trips to a beloved place, where, for the past few years we haven’t even had snow. The skiers sit in the hot tub and drink and try keep their eyes on the sky and not the muddy, loamy ground surrounding us.  For years I’ve promised my son a traditional sleigh ride, but it is no longer possible; instead we sit and stew in the hot tub with the skiers. We now know we have to dress for both winter and spring, especially when it comes to footwear. Although it was warm as spring, the grass and other plants were alive but not healthy looking. They looked, on the whole, like they were afraid to commit: bloom, or go protectively dormant? Follow the calendar (winter) or the temperature (spring)? For us humans, too, we seem paralyzed, afraid to commit, afraid to bloom, but also afraid to protect ourselves. Like that family in Minnesota, more willing to die than admit that the ice of a winter lake will no longer hold our weight.

Every day, there is more bad climate news. Mussels in northern California are steaming in their own shells. There was a foot or more of hail/snow in Mexico, where it does not snow even in the winter. Temperatures of over one hundred degrees Fahrenheit in France. But all this news, the parts per million, quickly become particulate matter in the brain. At what point do the encroachments on our daily life, the small indignities, permeate our defenses—three flights cancelled in a row because of unusually high winds, being knocked off my bike because of these same winds, the campus walk flooding after rain because it was never built for these new monsoon rains—when will we wake up to what’s really happening?

Perhaps it is time to step back instead and focus on the loss of the small, enjoyable rituals of winter turning to spring. Of the clear temperature–weather margins that used to exist between seasons. For those of us who used to live in that world with its four seasons, we are morally required to, at the very least, pull back on the unrelenting march of fossil fuels and energy consumption that drives this change. The new generation is told to view climate extremes as “normal.” The story of intense heat melting a trash can in Arizona is accompanied in the local news report on Twitter with a laughing face, and eggs are fried on cars as stunts. When weather “events” are not astounding enough to be newsworthy, they are just an annoyance to overcome (“More rain!”). The young people, though, they know something is wrong—thunder in the winter is not normal, nor are 40-degree temperature shifts. Many have taken matters into their own hands and begun protesting, forced into action by the adults’ failure to act. It’s only because of their chronological age that they can’t see and understand the cataclysm unfolding through the lens of history, the losses mourned but then jettisoned like ballast on a sinking ship.

A month after my friend died, I returned to North Carolina for her memorial. Heavy rains had turned Asheville into a flood plain visible from the air. My taxi driver at the airport said the rivers had jumped their banks and warned me there were destinations where he would not go. He described stopping at what had become a raging river in front of his tires, his passenger, grunting with dissatisfaction, removed his shoes and socks and waded across in the dark. Downtown Asheville, at least, was relatively spared. I drifted in and out of sleep while the rain sloshed at my hotel window as if someone were washing it by throwing a bucket of water at it.

The next morning, it was drizzling. This taxi driver said he wasn’t sure he could make it to the site; he had to drive through a few inches of water. Most people familiar with driving in runoff know it takes much less water than you think to lift a car and send it floating downstream. “We made it,” he said, cheerfully. “But if it starts raining, you may be stuck here for days.”  By the time I walked up the long driveway, I was soaked even by the misty drizzle. I had made it here, and that was good. But I did not know what my future would hold in only a few hours, if we might all be stuck together, surrounded by water, with nothing to do but wait and hope it would recede.

Would we get out of this? The “this” being not just this lowland venue surrounded by rising water, but also this loss of seasons. Even though the children of today do not get to experience them the way we over-fifties do, on some deep-down ancestral-knowledge level, the seasons do not go unmissed, and the young activists are demanding them back. My only certainty is that my best friend is dead. There goes another person who grieved that the simple pleasures we grew up with might never come again.

Song of the North Country: A Midwest Framework to the Songs of Bob Dylan, David Pichaske, Bloomsbury, p. 310