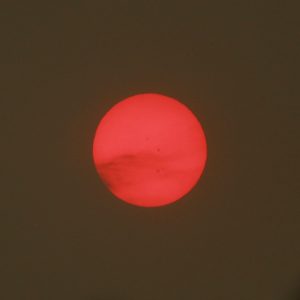 Everything’s coming up oranges.
“Ollie Ollie in come free,”
it’s all the statue can do to whisper.
Meanwhile, cats prowl the edges of wildfires,
eagles abandon their towers—
dropping knee pads and hats on an underclad country.

And the FLOTUS floats above this great country,
in gowns that will never be orange.
The handmaids watch as she enters the tower,
as children and chickens roam free—
cage to cage, scratching like matches that can never light fires.
Voices fall in the Capital, to lisps and backside whispers.

When I say wiretaps, I mean the kind that hears horses whisper—
even assholes have assholes to let out the gas. Imagine a country
where they do not. Which begs the question of who fires
first. Which begs the answer. Armpits or oranges?
Imagine the speed of a sea turtle freed
from a six-pack ring that once held Dos Equis. Up to the seaweed tower!

We sip Starbucks in cups in an old office tower
and never discuss its qualities. Meanwhile, baristas whisper
and chitter—do we think the bathrooms are free?
God should have sent fraternal twins to the savage country
within. The point of wasps is to stun us with wit—yellow—not orange,
which requires red, which burns like a belly on fire.

When words had fur and gristle, when pettifoggers came under fire.
Before words learned to hit or miss, before they forgot to aim from the tower.
When tangerine becomes orange—
even though. We know some things are just for seeing. Whisper
like crumbled chalk on the sidewalk, smeared by feet and country
drizzle. America, first, run like a pack of dogs set free.

Penultimate is a word I’ll give you for free.
What’s wrong with next to last? Can we agree that only campfires
should ever burn s’mores? Whatever’s best for country.
Meanwhile, God takes off Her heels. She doesn’t want to tower.
Her nails are stained and gray—not bloody—the bishops whisper.
How will She ever kill salmonella? (It’s all an orange

conspiracy, to free the jowls, the bitter bowels.) Suspicions of orange
spread across the country. There’s gleet in the gutters, even in towers—
where truth catches on fire—while all the winners whisper.