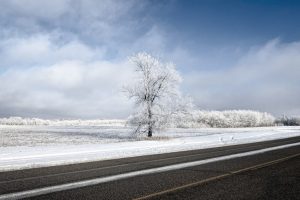 Ice on asphalt, fog on wing mirrors,
land flat, a yardstick, a bad tire,
dry rot on the sidewall,
the map of where I’ve been—
Iowa, Indiana, Ohio,
the mechanic tells me,
hard times lurk, bad news ahead.

On to Milwaukee, to Minneapolis—
I mistake the “m”
in middle class for destination,
on to Montecito.
Guns in the neighborhoods,
SECURITY printed in black letters
on chartreuse neon vests.
Fear is widespread, the “m” is for mudslide.

My daughter wearing vintage
rises from under mounds of clothing.
Her unconscious—
disguised as a heavy coat,
is an ancestral scar.
Memories of her great-greats,
relatives in black suits, worsted wool
coming into consciousness.

I wear my hood in the house,
the house on a ridge, fear torrential rain,
rush to shut windows, doors
the last time the combined sewer backed up
we received two 45 watt bulbs
and a gallon of water. It was very dark.

I changed our last name
to protect the house from graffiti.
In eighth grade my daughter was so depressed
she focused on black and white photographs
of the Holocaust. Curious about her great-greats
and what happened when the trains arrived
she seemed to live at Goodwill
and AMVETS searching for Cohen family coats.
Asking for black wool and cashmere,
she believed U.S. presidents and their men
wore matching topcoats to war.

For years after the atomic bomb,
Dad wore his Ike jacket while talking khaki
to us children, we were his scars,
his survival
before he sprayed DDT on dandelions.

Half child, half witness to the war,
I whispered to the autumn leaves,
asking the solstice if when it was over
could I say something.

What is a tweet
but language searching for a brain.
In a war of words,
airmail is jealous of email,
the service road crumbles
and bungalows and gardens
are added to a list of the endangered;
the moon is added
and the NYT only guesses we have
a Constitutional right to the internet;
I dream the Bill of Rights includes MRIs and chemo;
and ask that Amendments provide for
hip hop, Spanish, cursive, and metaphor.

Do you remember water?
When the mayor said
“This Organization Serves Everyone”
I said, prairie grass has deep roots
which hold the moisture. Where is the grass now?
It is where there is asphalt. After the election,
he said, “Your belly is our land.”
But I remember water.
Struggling to be tall, fertile,
I ask, where can I find a black cashmere coat
to wear to “Pantsuit: An American Musical.”

Elizabeth Krajeck is the author of two chapbooks and collaborations inspired by the visual arts including “Restoration Poetry” based on interviews in the Blue Triangle Residence Hall; “Half of What We Are Is Broken” an installation at IUPUI’s Cultural Arts Center; urban retail postcard poems; the paint chip poems; and 2018/2019 “Poetry in Free Motion” with the Quilt Connection Guild. A community liaison for Butler’s Center for Citizenship and Community, Krajeck started Permanent Press, Writers and Editors. Recent work includes publication in So it Goes: The Literary Journal of the Kurt Vonnegut Museum and Library; 2017 summer guest reader at the James Whitcomb Riley Museum; participant in 2017 Indy Writers Resist; 2019 “True Grit Saloon” publication/reading at the Eiteljorg Museum of American Indian and Western Art; 2019 The Indianapolis Review; and 2021 The Indianapolis Anthology.

Image By: Owen Harding at https://unsplash.com/photos/7zihBSEH7bQ