The news brings such terrible stories— 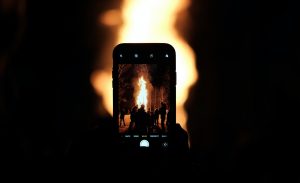 The girl who kept texting a friend
to give up the weight of his worries,
and bring his own life to an end.
The woman who fought against fire
found dead in a national park,
shamed in an unending furor—
A rescuer lost in the dark.

Why do we still feel distant
the more every distance is bridged?
Devices—pervasive, insistent—
might bring us together, as pledged,
and yet, we adapt to their medium,
our avatars shifting and small,
our voices turned text, or turned tedium?
And are we much closer at all?

That girl at the mall, half-distracted,
her friends cracking jokes as she smiled,
kept texting the boy, undetected,
words flashing between them. She dialed—
Depressed, he was weak or unwilling
to take the last step and grow up—
No one could confuse this with killing—
She texted him finally: Time’s up.

A woman who’s called to fight fires
should keep her true feelings in check,
or else the regard she inspires
will change to abuse or attack—
anonymous, crude—that pursues her
on-line in chat forums that seethe
with rumors that hang there forever,
unproven, until she can’t breathe—

The firemen on duty beside her
(or strangers who sounded like them)
had mocked her failed marriage and tied her
to multiple partners, her name
ridiculed out in the open—
harassment she lived with for weeks.
What were we expecting to happen?
The web forgives no one’s mistakes.

When did the world that we live in,
intangible, wireless, unreal,
require us all to just give in,
each breakthrough a dazzling ideal?
Who thought it a brilliant idea
that all of us gather on-line,
on watch while we browse social media
for someone brand new to malign?

The faraway texts kept on whirling
in brief replies blinking onscreen.
The boy scrolled, each message unfurling—
What else could his girlfriend mean
except that he had to take action?
The time for mere threats was long past.
Reluctance was just one reaction
she knew, with her help, wouldn’t last.

His last day was spent at the seashore,
with family who’d brought him along—
The boy, with his golden retriever,
went walking. Suppose it goes wrong?
But texts kept on flooding his cellphone
with messages sent and received,
demolishing all hesitation—
He read, and replied, and believed—

You told me you’re all set to do it
So what—are you backing out now?
Your family will miss you but screw it
From searching the web I know how
Don’t worry—it’s totally painless
I’ll send someone if you’re afraid
You just need your truck and enough gas
to keep the commitment you made

Six days before search parties found her,
a note left behind in her car,
the woman harassed saw, around her,
red oak and birch trees, winter-bare,
the rush of the waterfall calming—
No scorn to diminish its sound,
the branch that she chose reassuring,
and just far enough from the ground.

You’d think the tormenters who drove her
to take her own life would recede
back into the shadows to savor
their work, her disgrace and her deed.
Instead, when a woman defends her,
they gang up and flame her, renewed,
repeating the same vicious slander,
though racist rants, strangely, intrude.

When will we learn human nature
is worse than we want to admit?
Whose words will crush somebody’s future?
What crimes does a stranger commit?
The web joins, from faraway places
like-minded souls gladly won
to causes so vile and ruthless,
they burn like a cross on the lawn.

A girl’s lawyer claims, “There’s no case here—
Words aren’t a crime,” he maintains.
That woman distraught—who erased her?
Each post, undeleted, remains.
The boy’s truck was found, engine running,
too late for him. That was the plan—
He got out at one point, still breathing.
The girl texted, Fucking get in.

It’s hard not to think of the cruelties
we’ve witnessed or said face to face;
the age-old half-secret societies
that meet in some undisclosed place;
but why does the gift of a keyboard,
cell keypad, or downloaded app
compel the disclosures that, once shared,
entangle us all in their trap?

Whose fury withheld sets the fire?
Whose fury revealed fans the flame?
What sort of hate starts with desire
and ends with a dead woman’s name?
Which hatred wakes other resentments
that burn with a core of pure rage,
till all the world cries out for vengeance?
Lord, let me log out of this page.