—After Italo Calvino and Dorianne Laux 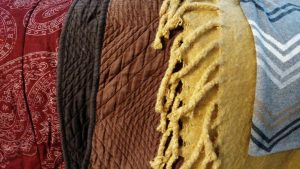 When I’m inconsolable, I like to go to The Blanket Room™. A new one just opened at the Maple Heights Mall. They wrap you in a blanket and turn out the lights. Then someone comes in, brushes the hair from your eyes, and whispers something like, “Now, sweetie, everything is going to be just fine.”  When you leave, you feel renascent and hopeful again.  It’s like a spa.

My friends say that I’m becoming distant, that I rely on this too much. Nonsense!  Balderdash! That’s not it at all. The thing is, everyone occasionally needs a quick pick-me-up, so I clear an hour or six from my day and zip over to the mall with whatever’s left from last week’s wages. Let’s say you get passed over for that promotion, you’ve been having trouble sleeping, or the Steelers lose. What time is it? Time for The Blanket Room™! Then everything is okay again. Or maybe the problem is deeper and more malevolent. Police goosestep down the street. The Republic decides to build a wall so patricians can stand on top and watch everything burn. These are the times when it’s best to be swaddled in darkness and held by strong arms as a soothing voice says, “Hush now; it’ll all work out.”

They’ll do that for you at The Blanket Room™.

The most popular service—the one I prefer—is where they wrap you so firmly, you can’t move. Not even your fingers or toes. Sometimes it cuts off the circulation to your face, then your lips go numb. It’s a bit controversial as, nationally, maybe seven people have died so far, usually from dehydration. The blankets—some people ask to be wrapped in four or five—hold in all your body heat and, man, you just cook for a while. It’s like sweating out a fever. Only instead of a fever, you sweat out the beginning of time. In those moments, when you’re teetering on the edge and nearly blacking out, someone kisses you on the forehead and says, “Don’t worry, dear one. It’ll all be better in a moment,” and you just know that you’re in generous hands.

It’s particularly invigorating if they bring in the machine with the crank, the lever, and that giant wooden flywheel. With that, they can wrench the blankets around you so forcefully, you hallucinate a little as the air is crushed from your lungs. It’s the most effective treatment. I mean, when you’re wounded, the bandage must be tight. And who isn’t wounded these days?

Wrapped in so many layers, it’s easy to trick yourself into thinking you’re in some kind of chrysalis or cocoon. I convince myself of this all the time, but cocoons can be complicated. Some are so seamless that the insect must slash its way out. Others are engineered with slender escape hatches, accessible only from the interior. While inside, you’re vulnerable to all kinds of predators. This is why larvae will hide a cocoon by weaving it under a leaf or branch. From a distance, one might see an ordinary tree—an elm, maple, or hackberry—but upon closer inspection, there might be countless lives in the middle of a harrowing change. There could be thousands of us wrapped in thread. Maybe the heat will be too much. Maybe the world will swallow us whole. “It’s just a cocoon,” I tell myself.

It’s possible we won’t make it out of this. It’s also possible that the membrane will peel apart and a set of wings will emerge.

What will we do then?