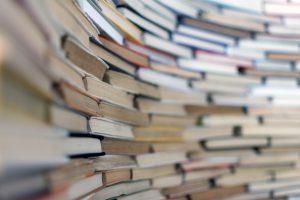 When I was nine years old, a woman came to our house. I was alone. My parents were at work, or on some obscure mission concerning allotments or storage units. Our house was piled with junk, which they described as temporary, just until the building work was finished. We’d lived there since before my memory began, and they had hardly unpacked.

I occupied only a small part of the house, my bedroom, where I hoarded things I valued—the books I’d found in markets and closing-down sales, gleaming like jewels against jumble. They were bound in stiff, cloth-covered boards, and their age made them seem more authentic, as though their long-dead authors had written them secretly just for me, then hidden them among the lumber of the world to await discovery. I lived intensely on Edwardian streets. Most of all, I lived in Anne’s House of Dreams.

Mum would pretend to be out if people called, or she’d open the door a crack and just peep through at the postman or the gasman. The house was a great burden to my parents, like a secret they shared, a mad relative they kept in seclusion.

Dust lay over everything they owned, like a pelt of fur. At weekends, they rose at noon, and if they had to leave the house—the house they so loathed and yet were loath to leave—it wouldn’t be before 4pm. Often they’d arrive at shops just as they were closing.

When the woman came to our door, I put on the chain and peered through the crack, as I’d seen my mother do on so many occasions.

She was a smooth blonde woman in a fawn cardigan. She didn’t look at me, but up at the cracked lintel instead.

“I hear you’ve got some first editions?” she said, raising a glittering hand to push back strands of hair blown across her face.

I stared at her.

“Yes,” I said. I had the whole series. They sat on their own shelf in my room. I kept my door closed against the rest of the house. My room was orderly.

Something about the woman made it impossible to shut her out. She looked so clean, so organised. I imagined that she lived in a very pale house, with matching sofas upholstered in cream cotton and framed pastel prints on the walls. She had raised her eyes from the lintel, leaning back so she could take in our peeling, spongy window frames.

“Why haven’t they fixed that?” she asked, pointing up at something I couldn’t see. “It’s dangerous.”

“Well,” she said, snapping her eyes onto me. “Those books? Why don’t you run upstairs and fetch them for me?”

I closed the front door softly. I felt I ought to hurry. In my room, I piled the books in my arms and then made my way cautiously downstairs. Rilla of Ingleside was wedged under my chin. The Anne books, stacked up, were the complete length of my torso. It had taken me a third of my life to collect them. My heart thudded against their spines.

I couldn’t open the front door unless I put down the books. They slithered across the red-tiled floor. I restored the pile, putting them in chronological order, with Anne of Green Gables at the bottom. I took off the chain and turned the latch. Without the chain the aperture was wider, and the woman could see inside the hall.

“You should look after your books,” she chided, pointing to them as they teetered. “Don’t leave them on the floor.” I bent to retrieve them. But it was impossible to lift the unstable tower. My fingers caught the covers. I clamped down on Rilla, but beneath her I could feel Rainbow Valley and Avonlea slithering out of sequence.

“I’ll do it,” she said with a sigh, extending long fawn arms through the doorway and splaying bejewelled fingers over my books. She lifted them easily, hefting them onto one knee. The pile looked smaller in her arms. The series curved over her neat bosom. She clicked away on pin heels, and I watched her putting my books in a box on the back seat of her car.

She straightened up, adjusting her cardigan and brushing something from its collar. She reached into her handbag on the front seat, and as she turned back to me I saw that she held a thin brown note. She walked towards me with the note extended. It caught in the wind, but her grip was tight.

“As agreed,” she said. I reached for the note, and touched it, but she kept hold of it. For a second, we both pulled. “Tell them to get that fixed,” she said, flicking her eyes back up to the defect she’d spotted. “Here’s ten pounds towards it.” She let go, and I stumbled backwards. She turned and left before I closed the door.

I went upstairs and lay the ten-pound note across the gap in my shelves.

Hours later, my parents returned and asked how I’d been. I didn’t mention the woman. They would have worried. I was sure they didn’t know about my books, or how precious they had been to me—how I loved Gilbert Blythe, how I trusted Miss Cornelia. They didn’t need to know that I had ten pounds and was a woman of means now.

Every time we left the house after that, I looked up to see what needed to be fixed. I could see nothing in particular, nothing that stood out from the dereliction of the whole.