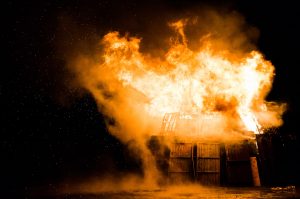 She wanted to run…but she could only take one long step to every corner of the cell and: wall…wall…wall… she pulled up her chin on the rusty sill around a small rectangle in the wall and shouted through the bars: help…help…I’m here…I am…I still am …I’m alive… but the smoke coming from outside filled her throat and she started coughing. Between her coughs she could barely breathe with the memory of his coughs when he got a cold…train coughs, he used to call them. She crawled back to the spot where she had been sitting, and sleeping, and dreaming, and feeling homesick for the last five years and nine days and sat in front of the small high opening on the wall…the small rectangle of her freedom in prison. She had shouted through it for the last hours but nobody could hear her except the other prisoners who were yelling and shouting too. She knew many of those prisoners in that lane. In another world they could have sat together and wrote a poem, painted portraits of their loves, or hummed to a song of freedom. In front of her eyes fire was quivering and roaring…un-consenting with the dreams of freedom pictured with words or paints or voices or sounds in those hopeful rectangles. Soon the fire would get into her cell and pilfer the last her that is left for her. She could escape nowhere, even if the fire set her free before killing her. She could hear the gun shots. She knew what it was. It wasn’t a fire, it was genocide.

She threw one last look around her little world; she could skirt it whole in four strides. The cold wall behind her was poking and scuffing at the small bones of her back. From that small opening she had seen colors; Of birds, of sun, of sky, of her husband. Blacks like and unlike his hair, yellows like an unlike the sun trickling into their bedroom, blues never like the turquoise he gave her, oranges like the smell of rain soaking the dry leaves in their yard. She missed him. She missed him so much that she couldn’t breathe. She missed him again and again; One more time until the reach of that fire. She wanted to miss him to her last breath. “I miss you” a cold air passed her dry lips.

She let her head fall back against the wall and listened to the fire roaring whenever it could be heard between gun shots and shouts. She closed her eyes. She wanted a last memory; Their wedding night. She and her husband stayed in a villa by the sea. At midnight she felt his hand taking her hand out of the sheets and then passed her through the moonlit room out into a dark, cool and smelling of sea.

She sprawled her feet on the cell’s floor and with her eyes closed, her toes touched the soft wet sands of that night. She remembered the salty breeze passing her face and caressing her hair out of asleep. She remembered that she clung her arm around the bend of his elbow and, rest her head on his shoulder, let her weight be carried on his side. His other arm, he circled around her slender waist, loosely and softly covered by a thin satin dress, its white turned milky under the moon. He walked her down near the water, stood still for a moment, and then kissed every inch of her face. His kisses slow and tender, pinned to the small waves that glided toward their feet, stroked their ankles and passed through their toes.

His fingers moved up her arms, untied the strings over her shoulders and a white strand fell down her body into the sea. The sea turned quiet, their breaths heavy. The dark waves, patched here and there with small stars, drifted the indentations of her body on the sand into the sea.

Seraph is a woman, a wife, and an educator who writes to live in Iran. She writes about love in unloved places.