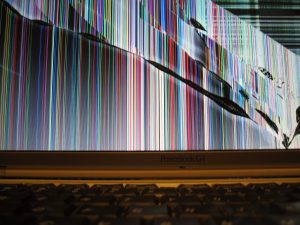 Each day’s episode gets titled according to that day of war. You discover it on the 11th Day of the Invasion and it’s the host that hooks you to this streaming Ukrainian English-speaking news show. Not because you’re attracted to him, not really, though his soft brown eyes, warm smile, mop of hair, leave a familiar heat rising up, buzzing through your skull, daily and beginning anywhere between 11 a.m. and 12.30 p.m. EST. No, it’s his calm delivery, his articulate thinking processed through broken English—stilted phrases, little stutters. He’s not nervous, not visibly at least, he’s just doing something he’s good at in a language he doesn’t speak very well. Plus, this broadcast has wartime quirks—bad connections, flickering audio—when this host who can’t be more than twenty-five tells you a bus full of children has been shot up, that America has decided these are war crimes, that an American journalist has died in an ambush, and a Ukrainian journalist has been killed by a drone. You tune in daily because these days the world’s got more gravity, more stutters and flickers, spins quicker. You tune in and tell yourself it’s okay to be preoccupied by the lives of others at a time like this. On the 22nd Day of the Invasion, you google the host, find him on Facebook, send an invite. His page is sparse and not in English, so you only have pictures to go on. He likes to play chess, smokes cigarettes, has been to Berlin. He accepts your request on the 25th day and you send a message—a note to say how much you admire the show for being transparent, unfiltered. You are a writer, you explain, and if they need any help with editing, etc., pro bono, of course, you are available. You have no true idea what that means, how you could possibly help, but you are spinning with this spinning world and you need to be aimed at something. When he responds, almost immediately, he tells you thank you. I do not know what to say this is the first message like this I receive. I am not professional, just nobody here to do it. I will talk to the team about your help. That is amazing! He places a tiny red heart at your last sentence: No problem, stay safe! On the 26th Day of the Invasion, he signs off by thanking the audience for their kind support. He has never signed off like this and so it jolts that heat up through your skull. He’s talking to you. You two have met mid-orbit, through the static. On the 29th day you can’t watch in real time because it’s a beautiful spring Saturday on the east coast of the U.S.A. and you and your partner take your child to the zoo. The partner insists, as they always do, on holding the child’s hand as you negotiate the crowd. As they walk several paces ahead, you think of the tweet you liked that morning, the image of the Ukrainian refugee walking along a cratered road with her two cats in a backpack on her chest, her dog alongside her—a backpack on it, too. The caption says that this will be one of the iconic photos of the war. In the monkey house you are consumed with guilt because it’s nice out and you’re free and your child is all life, laughing at the monkeys behind the glass, swinging on old tires. And what of the zoos in Ukraine? On the 31st day the host is gone and, in his place, a beautiful girl, maybe younger than him, whose delivery is only slightly smoother. You watch but it’s not the same. She’s stoic, more likely to read from a monitor. The days pass and the host does not return and he does not message you. When a shopping complex gets bombed in Kyiv, you check Facebook messenger to gauge how long it’s been since he’s logged on. You return again and again to check the time stamp. 1 hour ago, 5 minutes ago. You find yourself doing this throughout the days and into the nights and learn from the frequency of these time stamps that the host is not sleeping much, but at least he’s alive. When he returns to the show, it’s day 43 and you let out a long sigh because he’s there and he’s okay, giving you casualty numbers, showing you filmed footage of a tractor pulling stolen tanks through a field of mud. During an interview with a parliamentarian discussing the impacts of Russian sanctions, he tilts his head as he works to find the words to say sirens have gone off and he might have to sign off to take shelter. Take my apologies, he says steadily, we are working under some harsh conditions. It takes away your breath, how this host is more confident and comprehensive a human being than you know you’ll ever be. And so you message him—not to say that, but to say that you find him remarkable and you hope he’s okay! And he does not respond, though you see he’s seen the message and you remind yourself that it’s no big deal, there are war crimes, there are women walking to Poland with cats in backpacks. On day 44, he signs off by saying he and his team are thankful for the support of their audience and they are sorry that they do not have time to reply to every question or proposal, they are busy and there is no time. He is smiling and he is calm and you tell yourself that minute 57 of the 44th Day of the Invasion is a minute dedicated to you. He’s met you back through the static, and there you are before him, squeezing the wrong kind of meaning out of life, because it’s not hurting anyone to do so, you’re not hurting anything at all.

Heather Rounds is the author of the novel There (Emergency Press, 2011), the novella She Named Him Michael (Ink Press, 2017) and the novel Light There is to Find (Adelaide Books, 2018). Her poetry and short works of fiction have appeared in numerous publications, including PANK, Smokelong Quarterly and Atticus Review. She serves as PR Manager for Mason Jar Press, an independent literary press based out of Baltimore, MD. Visit her at http://www.heatherrounds.com/