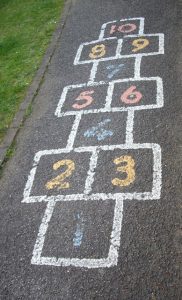 In Kristen’s driveway by the hoop she says you know global warming is
real right and kicks the bottom of her metal scooter with the inside
sole of her leopard Converses. I say yes.

Yes. I remember this—had seen a plastic-covered book about it on the
counter. It has an earth with a smoke swirl above it. It’s due back
Friday. She says yep, every person on Earth will drown when Antarctica
melts. She says the sun is gonna explode, and I think every one of us,
all specks of nothing, will blip into the black space of big time like
the babies we are.

Now—she’s not wrong. Now—I see news things, headlines like YES IT
REALLY IS SO BIG BAD and IT’S ALREADY TOO LATE and I’m blonde Jules,
purple hoodie and Dr. Pepper, chalking pavement next to Kristen forever
and ever again.

On the Red Line, I’m listening to a podcast and BBCers are saying
Alabama in the wrong accent. Children are among the tornado dead. And
they only had minutes.

On the 66, I’ve switched to the Green New Deal—freshman
congresswoman, carbon emissions, 2050, and solar. Trump thinks
socialists want the power on only when the wind blows. And the bill will
not will not pass.

Sideways on the bus, looking at dorms, I’m thinking
about the Blue Ridge. Its dynamited mountains, its rocks blown vertical
for me to drive through will all be underwater, like Kristen
said. It’s a brown place, always autumn, brick, and squiggly power lines,
empty since the mines closed a long time ago. Further inland
and higher up, it’ll live long after the college, be the coast for just a
day. Fifty miles east, the book on the counter, Kristen’s
driveway—a ridge before the drop off, hopscotch and bubble letters
bursting algae and boiling blue in the hot hot sun.