The Trip Home From College

On Monday, I drive six hours from North Carolina to Atlanta to pick up my son Sam from his university. On Tuesday, we prepare to drive back, shoving into our car his entire dorm room—electronic piano, ratty sheets, plastic stackable drawers, boxes of sneakers and never-worn button-down shirts—turning the Kia into an overstuffed suitcase, a Croc here, a bottle of shampoo there. Before I arrived, Sam tried his best to organize, but he had only two days to shut down his life and say goodbye to his friends, many of whom are graduating seniors he’ll never see again. They’ve been hanging out together on a campus that already has two positive cases of COVID-19. I want to help him through his sadness, but I am tired, scared, and wondering how to practice social distancing while spending six hours together inside a car. For weeks, I’ve been cramming epidemiology like I’m preparing for the MCATs, but I haven’t gotten to the chapters describing how virus molecules move through the air. In the end, our strategy is simple: I don’t share my Mentos; Sam doesn’t share his Slim Jim. 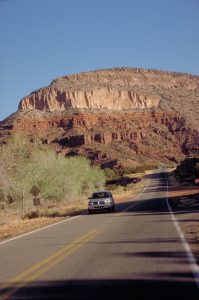 As we merge onto I-20, I announce, “Later, we’ll switch seats.” I don’t mind driving most of the way, but, after the sun sets, the teenager with good night vision will take the wheel and get us home.

Four hours later, after stops for gas, bathroom, and food (using paper towels to grip pumps, flush toilets, open doors), we pull into a parking lot and discover that we can’t switch seats. The dorm room in the back of our car has pushed the driver’s seat practically into the steering wheel and Sam doesn’t fit. He goes back to sleep.

I drive, leaning forward, clutching the wheel, my eyes squinting at the road as the sun sets and the Carolina farmland turns soft and hazy, then gray, then disappears. I think about the expression on the face of the maintenance staffer at my son’s university who told me, “These are my kids and they’re all leaving me.” I think about the lobby of a Burger King in South Carolina, seen through a window at five p.m. on a weekday, empty with its chairs upside down on the tables. I think about the exchange I overheard between two convenience store clerks somewhere off I-95 as they tried to figure out if they will have jobs next week—“They’ll keep us, won’t they?” “Of course, they’ll keep us, won’t they?” And I think about my phone conversation with my friend Hope, sheltering in place in San Francisco, who utters a single, desolate “Wow,” when I tell her that it’s not just the Bay Area but also the rural South, and maybe the entire world, that seems to be shutting down, and we both realize at the same moment that this serious thing keeps getting more serious and that, at this point, only the outer bands of Hurricane Coronavirus have reached the United States. I think about how the situation has become very grim and I wonder who will die. The GPS tells me I have 90 minutes left to drive through the darkness with my bad night vision, and I’ve finished the mellow Alexander McCall Smith audiobook that has kept me from obsessively following the news, and that’s the moment when Sam wakes up and says, “I’ll play you music,” and while he’s plugging in his phone I become extremely irritable and say, “I’m tired and I’m the one driving so you can only play what I want to hear,” and these mom words could be dynamite thrown at a teenager, except that Sam is kind and his music taste extends beyond his beloved Hip Hop, so for the next 90 minutes he gives me comforts from my own college years, Bob Dylan, Neil Young, Cat Stevens, Bob Marley, and two different versions of “Angel from Montgomery,” John Prine’s and Bonnie Raitt’s, and it’s while we’re listening to one of those and plunging through the darkness that we both belt, “Just give me one thing that I can hold onto,” and I feel a sudden urge to grab my boy’s hand, but I don’t.

Dana Sachs is the author of four books — the novels If You Lived Here and The Secret of the Nightingale Palace, and two books of nonfiction, The Life We Were Given: Operation Babylift, International Adoption, and The Children of War in Vietnam and The House on Dream Street: Memoir of an American Woman in Vietnam. Her articles, reviews, and essays have appeared in many publications, including National Geographic, The Wall Street Journal, Travel and Leisure Family, The International Herald Tribune, and Mother Jones. She teaches in the Honors College at UNC-Wilmington and is currently at work on a book about the refugee situation in Greece. Sachs is one of the founders of Humanity Now: Direct Refugee Relief.