The View from My Bed

Because the blue and gold pot on my windowsill is made of Prague glass, it seems to glow in the dark. There are four small windows in the bedroom where I am living now. Deep wells set into the low wall of an attic with a sloping ceiling. Each window is about a foot square, and the objects placed in front of them have no purpose. They can’t be used to hold a window open or tether a tiny curtain across the inset glass proscenium.

I often see this small, lidded bowl reflected by the light from the taxi company across the street. The taxis have been parked in the overflow lot for two months now, but the light stays on all night. I sleep less in the time of Corona, dateline Brooklyn, Spring, 2020.

The painted gold bands circling this pot are covered with small glass flowers, and the lid has a sturdy knob of dense blue glass. It is an elegant object, made for hairpins, cotton balls or face powder on a dressing table. A container for objects of adornment, it holds nothing but light. I have never placed anything inside it or had a dressing table with a cushioned bench to match, as if putting on make-up was similar to playing the piano. 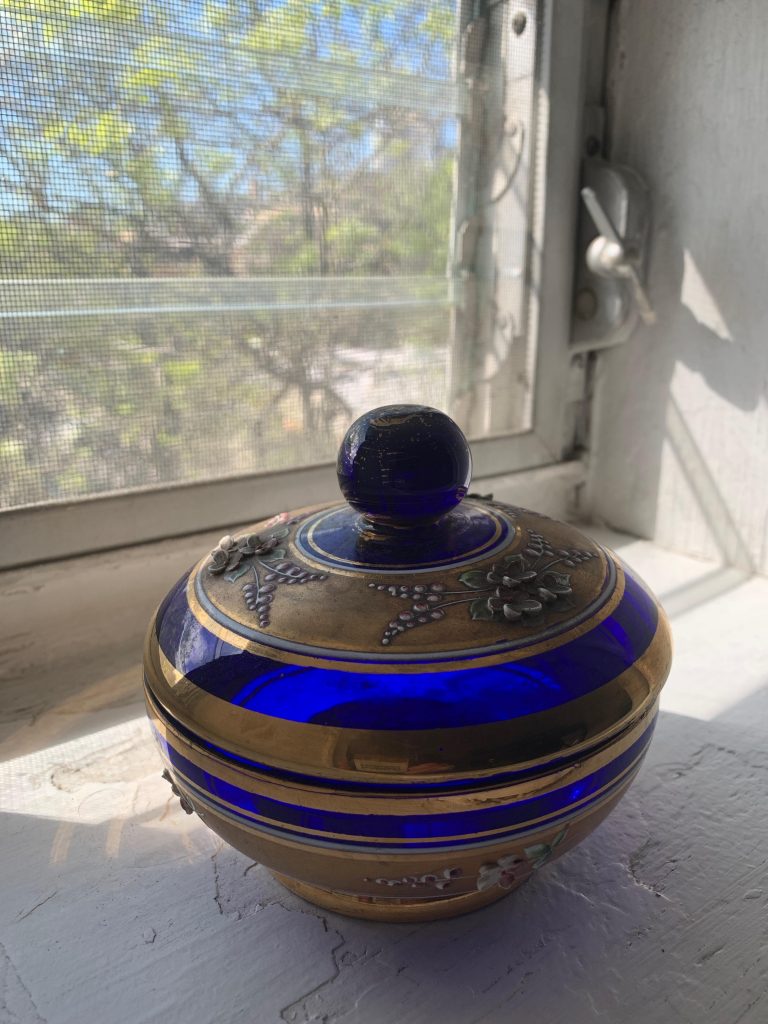 I have also never played the piano.

The glass pot was one of a set of three. There is a matching perfume diffuser with a tasseled rubber ball made to press scent between thumb and forefinger, one squeeze under each ear,  a third on the hollow at the base of the neck. I don’t remember how I know this, my mother never wore perfume, it’s something I picked up along the way. The final piece in the set is a bottle too large for perfume with a gold painted glass stopper. I have never filled either bottle, though I appreciated the gift when it came to me, years ago. The diffuser and the bottle are wrapped in thick socks in a drawer under my bed to protect them from breaking. It’s not that I don’t adorn myself, then, now, always. They probably came from a flea market or antique store, they look as if they belonged to someone from before I was born. Someone with a proper dressing table and all three objects arranged in a semi-circle as she readied herself for an evening out. These objects are too delicate to be kept in a real dressing room, where the lipstick, make-up brushes, moisturizer, cough drops, and pressed powder are packed up quickly at the end of the night, on your way to the bar.

This glass pot on my windowsill gives me pleasure. I received it from someone I no longer think of on a daily basis, and it is a mistake to read too much into my keeping his gift on display.

In the I Ching, Grace is number twenty-two of the sixty-four hexagrams that can be formed by tossing three coins six times. The symbols that form the hexagram for Grace are the mountain (keeping still) over fire (clinging). “This hexagram shows a fire that breaks out of the secret depths of the earth, and, blazing up, illuminates and beautifies the mountain, the heavenly heights.”  But the oracle warns against grace: “It is not the essential or fundamental thing; it is only the ornament and must therefore be used sparingly and only in little things.”

I am here to defend the unessential in a time of enforced stillness.

There is the fundamental nature of the rounded lid with its dependable knob. There is the hand that painted pink and white petals on top of the gold bands, circling in miniature bouquets. My window is in a city in the middle of a plague that has stilled the world, above a street that is neither quiet nor leafy. For five years I have kneeled by this window in the middle of the night, jolted awake by curses and shouting, afraid to call the police who only make things worse. Most of my neighbors need doctors not cops, and there are no doctors available for them here— especially now, but always, on this street, in this city, in this country.

I have listened, sleepless and hidden, but never reached for the phone.

The blue elephant raises her trunk in a circle until it touches her forehead. Her ears are small for an elephant, but her legs are strong and though she seems to lack a mouth, she is cheerful and stalwart. Qualities I lack this morning. The elephant is made of clay, a school project from my younger daughter. I wrapped and carried it by hand when I moved (twice) since she brought it home as a gift. The elephant stands with two small iron sparrows below her, I picked them up at a flea market in Italy. They have been in conversation since I placed them on the windowsill over a year ago. The elephant sprays her back with water from a river while the birds step carefully below her, taking a shower from the droplets bouncing off her sides, picking up bits of grain fallen from her invisible mouth. I am longing for a river today, or a flea market like the one where I found those dense little birds. It was a hot July day, I was wearing a sun hat and pushing my youngest in a stroller while her father and our older daughter wandered beside us, picking up this and that, taking too much home because everything was cheap and we were sure we could find room for it somehow, as if it would always be a time of gathering.If I had changed my life then, would I still long to change everything about it now? 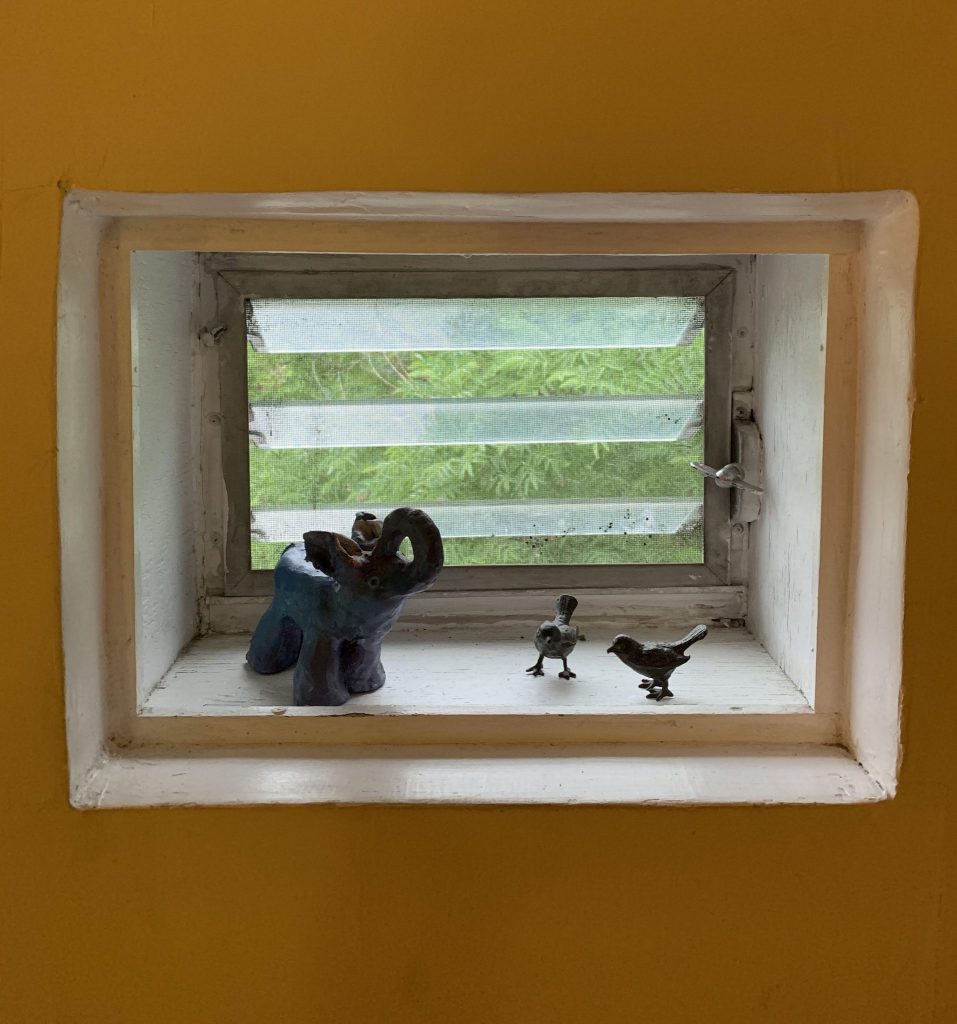 Yesterday, I went to the local cemetery to meet a friend. We look for places to walk six feet apart that aren’t packed with “breathers” as we call them. There are many bodies but fewer breathers at the cemetery, where the avenues are quiet and shady. Like the gravestones, everything is named here, Sumac path intersects with Myrtle, just off Sycamore Avenue. We climbed away from the path toward a thick limbed tree with initials carved into the bark with a crude heart, far enough from the closest gravestones to feel comfortable sitting down. We had each brought wine to sip in coffee travel mugs, like teenagers sneaking into a rock concert, and agreed to take off our masks (outside? enough distance? no fucking idea, really). Once the mask was off, I could see her sadness. She had only just returned to the city but was talking about leaving it for good. We are all suspended here, held taut in the midst of the dying. As I listened, a flock of sparrows, black against the green, rose past her profile. They lifted and turned in exuberant  bursts. I wanted to say, look! The birds! But I didn’t interrupt this friend whom I will lose to another landscape if she resigns from New York City. I was born here, and have left so many times only to return, that I’ve given up on living anywhere else.

This city is my oldest friend.

We got lost trying to find our way back to the entrance, as I always do.  The cemetery is a vast, land bound Venice, every path a twisting street branching off the Grand Canal. I always find my way eventually, and like Venice, I refuse to download a map to my phone. My friend had to pee, so we went into an open building that surprised us with the sound of water running in a fountain, sleek stone walls lined with crypts and bouquets of plastic flowers. It was as if we had crossed a portal from the nineteenth century into the future, where there was a well-kept spa for the dead, who don’t need bathrooms. Desperate, no exit gate in sight, she finally pulled her pants down behind a gravestone while I stood guard, laughing and averting my eyes. We apologized to the name on the grave and once we finally found the gate we had entered, it was locked. A woman with a pink fanny pack was trying to squeeze her way out between the bars of the fence—it didn’t work. We followed her along one of the main avenues toward another entrance, keeping the length of a grave between us.

It felt like miles to the next entrance, where the guard let us out with a ring of keys that rattled like something out of Dickens. I wondered what emerged behind the gates on the night shift, thinking of the freshly dug earth we had passed and my own beloved dead, buried hundreds of miles north, in a family plot with a broken column engraved with the names of five children who died in the influenza of 1918. We hurried through the gate down a dirt path between the fence and a two-lane road, rocks skittered underfoot and we were both wearing the wrong shoes. In another time we might have stopped at a bar to toast our escape, instead we stood apart, hugging ourselves instead of each other, and I biked home past a well-dressed couple who took their masks down for a photo, smiling like newlyweds.

These days and nights repeat themselves. The blue elephant bathes with iron sparrows, the children are sheltering in place, and it might rain hard tonight.

The sky is uncertain.

Rebecca Chace is the author of Leaving Rock Harbor; Capture the Flag; Chautauqua Summer; June Sparrow and The Million Dollar Penny. She has written for the New York Times Magazine, New York Times Sunday Book Review, the Huffington Post, The LA Review of Books, Guernica Magazine, Lit Hub, NPR’s All Things Considered and other publications. She is associate professor in Creative Writing and Director of the MA Program in Literature and Creative Writing at Fairleigh Dickinson University.