There Were Six of Us 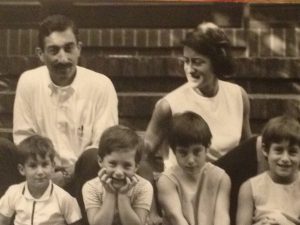 There were six of us. And then, abruptly, there were five. It happened overnight, except the truth was that it was over dinner. It was late in the summer, an August evening; warm and sultry, which in San Francisco occurs maybe once or twice a year. I was fourteen, and I was out with a friend. My parents, my older sister, and my youngest brother were at home, sitting around the kitchen table. The phone rang and my father answered. He listened, and my sister told me later, his face grew pale. His eyes went vacant. The person at the other end apparently kept speaking, because my father kept listening. He took down a number mechanically, then hung up and turned to my mother.

According to my brother and sister, the same transformation came over my mother’s face, only more slowly. She didn’t know the full story yet. She stood there, waiting, not wanting to hear.

My father: “They said he was shot. In the head.”

I heard all of this later, maybe that night, or maybe it was a day or two afterward.  The days immediately following that night are a blur for me now, which I’ve always found odd, because the first few minutes, right after I found out, are stuck like hyper-focused slow-motion movie frames inside my head.

When that call came, I was at the movies. It was a couple of weeks before school started, and I had just returned home from six weeks away at summer camp and a week visiting my grandparents. I went out that night with my best friend, Brady, the first time we had seen each other in weeks. We were beside ourselves with glee to be sitting in the back row of the theater, unsupervised, sneaking cigarettes, eating popcorn and whispering. This was in the days when smoking was still permitted at the movies. You could watch while the smoke curled up from your cigarette and rose slowly, lazily, into the pale light of the projected image overhead.

At the end of the movie, Brady and I left the theater, expecting, as we usually did, to catch a bus home. To my surprise, my parents’ car was parked against the curb directly in front of the theater. My mother and father were standing next to each other, strangely rigid, alongside the car. More than my parents’ unexpected presence and posture, I think it was the fact that the car was smack in the middle of a no-parking zone that made me realize we were dealing with something serious.

Brady and I walked up to the car. My father, without any telltale inflection in his voice, said, “We need to talk to you.”

I asked if everything was okay.

My father looked like he was about to say something gentle but hurtful, only he didn’t know quite how to phrase it. He was holding back – to avoid paining me, I can only assume.

My mother, never one for indirectness, said flatly, “Tommy’s dead.”

I remember thinking there was something weirdly unrelenting about how she said it – like she wasn’t going to spare me, not for a second.

After that, I remember a ringing in my ears. I remember my heart pounding and not being able to catch my breath. I remember not being sure whether I was going to sob or throw up. I remember being pushed – by my mother? My father? Brady? – into the back seat of the station wagon, where I stared at the grey ribbed vinyl on the back of the front seat, my breath heaving, while my mother told me the little they knew: At my grandmother’s ranch in Wyoming, Tommy and another boy had been playing with a shotgun. It went off, somehow. Tommy had shot himself in the head, or perhaps the other boy had shot him. He died instantly.

We dropped Brady off at her house; she was crying, too, and she clearly had no idea what to do or say. I watched her walk, hunched over, up the brick stairs to her house through blurry tears, and I remember thinking, She’ll never know how to be friends with me again.

When we got home, I found my brother and sister upstairs in our second floor hall, in their pajamas. Everyone seemed slack, empty; the upstairs hallway, large already, seemed cavernous yet strangely airless. For a moment, it reminded me of getting the air knocked out of you after falling off a horse. We all hugged, crying. Perplexed.

That night, my parents gave all three of us sleeping pills. I doubt they slept themselves; the next morning, they looked drawn and ghostly. They hugged us and talked to us, but it was as though they had aged a decade overnight.

For a week or two, it still felt like there were six of us, only we weren’t together. My parents flew to my grandmother’s ranch to identify Tommy’s body, bury him, and bring his things home. My sister was sent to stay with our other grandparents, whom she had been scheduled to visit in Michigan. My brother and I were hastily sent away on a three-day rafting trip with close family friends. The friends, on the raft trip with two other families, had no idea how to talk to us or deal with us, except to help us with our life jackets and offer us a lot of food. My brother and I smiled, stayed in our puffy life jackets, and didn’t really talk to anyone except each other. He was ten, and I was supposed to take care of him. At night we lay in our sleeping bags a little ways away from everyone else and whispered about the stars glittering like tiny jewels overhead. My brother asked if Tommy was up there somewhere, listening.

It wasn’t until my parents came back from Wyoming, and my sister got back from visiting our grandparents a week later, that we found ourselves around the table in the kitchen for dinner. For the first time since Tommy’s accident, we were all together, and there were five of us. One chair sat vacant; we avoided looking at it.

That night, in our shared bathroom, I told my sister, “It feels lopsided.”

“It feels awful,” she said.

Nobody told us much about how Tommy died. We knew about the shotgun, and that it had happened in a field, and the dying instantly, but that was about it. Tommy had long been fascinated by guns, but he had only limited opportunities to put his hands on them, in Wyoming or anywhere else; safety rules were tight at the ranch. Except that somehow, on that particular day, the ranch foreman’s gun cabinet had apparently been left unlocked.

There was a brief mention of the fact that it might have been the other child’s hand on the trigger – that it might not have been a total accident. A slipped finger?  Curiosity about what would happen if he squeezed, ever so slightly? But Tommy was not yet thirteen, and the child he had been playing with was only fourteen, and not quite right in the head, and who knew? Nobody else had seen what happened, and it wasn’t like it made any difference at that point.

There was no funeral. When my parents flew up to Wyoming to identify his body, they bought a basic wooden casket and buried him in the woods in an unmarked grave on my grandmother’s ranch. From the day Tommy was buried, we had no idea where to find him.

“He loved it there,” my mother had said, referring to the ranch, when we asked why they hadn’t brought his body home. “It’s where he would have wanted to be.”

My grandmother’s ranch, which had belonged to seven families from the East Coast, was built in the late 1800s just outside of Jackson Hole, in a sheltered valley at the foot of the craggy Grand Teton mountain range. When the Grand Teton National Park was established in the early 1900s, the ranch, located just inside the park boundaries, was grandfathered in with a decades-long lease, with a provision that, at the end of the lease term, the families would dismantle it and remove all evidence of human habitation so the area could revert to wilderness. All of us had spent stretches of our childhood summers there, Tommy and I most frequently. The summer before, when we’d visited my grandmother together, I remember realizing for the first time the uniqueness and privilege of hiking and riding horses through the forests and up and down the hills of Grand Teton National Park as though all of it was our own backyard.

As soon as my parents got home from Wyoming, my mother went up to Tommy’s room and started sorting through his possessions to give away. A few years before, Tommy had moved from the large room he had shared with our younger brother to a smaller third-floor attic aerie with a sweeping view of San Francisco Bay. The room had a giant wall of shelves containing a jumble of his books and toys, along with machines and equipment in various states of disassembly and reconstruction. Tommy loved taking things apart to figure out how they worked.

My mother was the distillation of efficiency, and, within a day or so, she had separate piles of books and toys, neat stacks of little shirts, and color-sorted boxes of socks and underwear. She told us to take anything we wanted, and then she boxed it all up and sent it to the Salvation Army.

The only time I saw her show any emotion about what she was doing was a moment when she and I were alone together in my brother’s room, going through his shirts. She was folding a blue Oxford-cloth button-down, the kind boys and men in my family wore like a uniform. Without thinking, I said, “His eyes looked so beautiful in that shirt.” Tommy had had radiant blue eyes – the only one of us who did. He was fair-haired and blue-eyed, and had lovely golden skin – anomalies in our family. I was fair-haired with green eyes; everyone else had dark hair and brown eyes. Tommy and I, who were both middle children and the closest together in age, had joked for years that we were adopted together from another family.

My mother looked up, her eyes streaming tears. “Oh Sara,” she said. “That was the worst thing about seeing his body: his eyes were gone. The bullet blew out one of them, and the other, I don’t know, it must have fallen back into his head. There was nothing there.”

I looked at her, aghast, as she blew her nose and returned to packing. It was the only time that either of my parents offered any detail about the condition of my brother’s body.

Years later, when I went to Wyoming with my eight-year-old daughter to visit the place where Tommy had died, I couldn’t find it. We hiked back into the woods where the ranch had been located, but all we saw was a sloping hill where the road had once descended into the valley, at the bottom of which was a graceful plateau dotted with trees and fallen logs. The only thing that looked familiar was the sweep of the plateau and the soft carpet of fallen pine needles. Far off, I caught a glimpse of sun-dappled water between the trees. It might have been the rock-strewn creek our horses had always clattered through each time we rode from the ranch into the Teton mountains.

This essay is excerpted from Sara Frankel’s memoir-in-progress, Six of Us.