Outside, the sound of clapping.

Paul and I rushed out to our front garden, astonished. From doorways, at the end of walkways, from second-floor windows, our neighbors were banging on pots, clapping their hands, woo-wooing the National Health Service.It was very un-British. A call had gone out a few days before for people in Britain to applaud National Health Service workers who were struggling with lack of testing, shortage of equipment, and a worldwide pandemic. Paul and I didn’t expect anyone to actually do it. The Brits are a reserved lot, especially when the pubs are closed.

But now, a mother stood clapping with three bouncing kids, a taxi driver tooted his horn as he passed; later, on the news, we saw ship captains blasting their ships’ horns in a port in Southampton, where I work; Londoners applauding from their balconies; the Scottish bringing out their bagpipes.

In the first week of the lockdown, cases increasing, fears of overwhelmed hospitals growing, this was a release. Emotional. Joyful, too.

Then again, it was British, because the NHS, for all people might complain about it, is a source of national pride. The NHS is like a brother–only a Brit can criticize it.

We’re slightly ahead of the USA in terms of understanding the Covid-19 crisis—mainly, I suspect, because we’re that much closer to Italy. I’m consistently amazed at how no country seems to comprehend the seriousness of this virus until the trouble hits closer to home.

At one point, Boris Johnson’s government was talking about isolating anyone over 70, and trying to develop a “herd immunity” to Covid-19 by having a good number of the healthier population catch it. The government later denied this was policy, but everyone heard them.

Maybe next time, all those people clapping on their doorsteps will vote for the party that actually funds the NHS, my stepson said the other day.

A dose of realism—that’s British, too.

I’m still frustrated by the government’s response. Each day, the health secretary Matt Hancock comes on the news to give yet another future figure for how many tests they plan to administer, again ducking the fact they haven’t “ramped up” as much as promised. Earlier this week, he claimed we’ll be doing 100,000 each day by the end of April, but they promised 25,000 tests per day on March 18, and didn’t reach 10,000 tests until April 2, according to The Guardian.

Then they reveal that some of these promised tests will be antibody tests, which tells us if someone is immune–but after the fact, when the individual is no longer contagious.  Contact tracing aimed at preventing the spread of the virus becomes less relevant, and less feasible, if they’re not going to test people until after they’ve recovered.

The earlier comments on herd immunity come to mind.

Herd immunity is most commonly spoken of in terms of farm animals like cattle and sheep: vaccines might be given to new lambs, for instance, to prevent them from developing a type of pneumonia virus and passing it on to others who are not yet protected. (The word “vaccine” derives from “vacca,” Latin for cow.) So I thought I’d ask a farmer about herd immunity.

I met John Thomas at the Cardiff Riverside Farmers Market. Thomas runs an organic farm outside of Cardiff, with about 70 cows and 200 sheep, and he tells me he feels fortunate: in this area of Wales, there aren’t any viruses his animals can catch for which he doesn’t have a vaccine. And it’s only during lambing that his animals are kept in the barn anyway, when viruses are more likely to spread.

If a virus arises, he said, “We have extensive fields. I can just send them outside.”

To me, it feels like Johnson and his government left us all for too long in the barn. 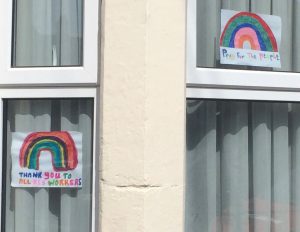 So far, though, I’ve been lucky. My university is switching to online teaching, so I’m not only safe, but I’m still getting paid. While I’m stressing over the new technology, Paul has been cooking me pasta puttanesca or roast vegetables. My friends and family are staying healthy so far, including my mother-in-law, 92, in Swansea, and my 93-year-old father in Florida. And people are helping each other. My mother-in-law’s neighbor shares the fish & chips that a man in her church is cooking every week to help people who are shut in.

How normal it’s become, too, two weeks into the shutdown. Today, I dutifully stood outside three different food shops that were limiting how many customers could go inside at once. I lined up on the carefully placed yellow tape, six feet in front of and behind other customers. Two doors way, a butcher shop was taking orders at the door.

And yet, still how strange it is to drive through the neighborhoods of Cardiff: cafes shuttered, people queuing outside the supermarket; Chapter Arts Centre, usually a hub of activity from 8 a.m. past midnight, sitting dark and desolate.

I have been finding refuge in a short run most days, which I started after my gym shut (desperate times indeed when I start running). The reedy wetlands reserve that I run to on Cardiff Bay, where I’ll see ducks, grebes, coots, even sometimes a heron, is much the same as usual: a few dogwalkers, a few pedestrians, the occasional birder.

The other day, I ran a bit further to look at the touristy bit of Cardiff Bay: it’s always reminded me of Baltimore’s Inner Harbour, and I look over the wood-planked boardwalks past restaurants and coffee shops, all empty: a ghost town, without ghosts.

I quickly turn back to the park, then venture out to the dock when I see no one else is there. I stretch my legs, lean forward to stretch my back and look through my legs: there’s my world, upside-down.

We’re all worried about what’s to come, not only personally, but nationally and globally. About 3,600 people in Britain have died when infected with the coronavirus, and today’s death toll was the highest yet; some 20,000 deaths are predicted, even with the lockdown, according to Imperial College London. We’ve not reached the peak yet.

And then, earlier this week, such strange, worrying news: Johnson himself in Intensive Care after his symptoms of Covid-19 turned for the worse. I’m no fan of his policies, and yet, I feel upset. It’s as if the first person I actually know is at serious risk from the coronavirus.

On the windows of houses in our neighborhood, and across the UK, children have been putting up rainbow paintings that celebrate the NHS. And tomorrow night will mark the third night of  “Clap for Carers.” I’ll be sure to go outside again where I imagine our three young neighbors will be out again, too, banging wooden spoons on metal pots, smiling, cheering.

We’ll go outside and cheer back to them. They’re our sign of hope. 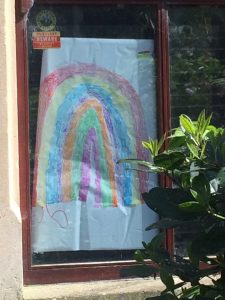