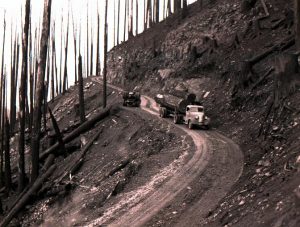 we were drawing conclusions

The folk were never entirely horrible.
They meant well.
It was more like they’d been . . .

well, seized, you might say.
Years later, a few story-starters tried to figure it out—
tried to piece together “first, second,”

“because, therefore,” that kind of thing.
We got as far as “not only, but also”
before we ran out of funding.

And who can blame them?
Photographs prove that the sun shone,
that a fat king was crowned,

that a stag as big as a mastodon
was cooked on the front lawn.
Ten eager kitchen lads turned the spit,

and the consiglieri draped a lovely lady
over every armrest.
But this is what I mean by seized:

Imagination ran away with the folk,
and the abscondery was a package tour—
like a Crusaders’ party cruise, say,

or a Caligula-themed all-ages show.
Blame Canada,
if you need a culprit,

for the results were predictable.
The kitchen lads were merrily spitted,
and the ladies got

what the consiglieri enjoyed giving,
and the fat king crawled under the table to lick his crown.
No one wanted to waste grant money

on this kind of ending.
We shut down the project years ago,
cadged jobs in the private sector,

waited for the fallout to poison Ohio.
I’ll admit, in hindsight:
maybe the folk were a little bit horrible.

They knew how to roast a stag, though.
And no one forgets a treat.