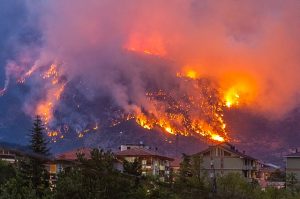 If Po’ Lightnin’ still be Muse of mine,
may he strum a few Orphic chords
for my brother Robert, who
is soon to be skipping town
to avoid his creditors.

The Sonoma sunlight,
plumper of jammy grapes
clutching dusty hillocks,
sparer of area barons’
nestled residences—is a
blood orange ball behind
a curtain of brown ash.
Even the algae in my brother’s
swimming pool looks eerily
crystal in the smoke-filtered light.

His charming Santa Rosa house,
an upside-down mirror
of the house we grew up in,
complete with an Elm out front,
is finally empty of the five-person family
who fled Mexico to avoid El Chapo,
or someone just like him. My brother
took them in after learning they’d
been mistreated by some white lady,
her charitable impulses turned suspect
by a demand that they learn English.

The head of this Mexican family is
head cook in my brother’s brew pub.
Good cooks are hard to find, especially
with the crackdown on “illegals.”

It’s going under. The brew pub.
First came the virus, which made
indoor dining hazardous, then came
the fires which drove diners back indoors.
Face masks hang on the chins of the few
who refuse to give up restaurant food.

I suppose one can get used to anything.

There’s a lot of money in purgatory,
a shell game in the hundreds of thousands
and no one can tell, not even the IRS,
which investments will come up empty.

California’s a garden of Eden
A paradise to live in or see,
But believe it or not, you won’t find it so hot
if you ain’t got the do-re-mi . . .

So sang Woody Guthrie. You, Sam,
spent some time in Frisco brightening the
door of a pixie folk singer. But finally it
wasn’t your jam.
My brother, once
a lithe surfer, now an avid bicyclist
(despite the gout) thought he’d never leave,
thought he’d ride the back of
the Golden Bear into the sunset.
But even a new mindset can’t
save a person from the tumbleweed-size
balls of fire bouncing down the
freeway. When the levee breaks and
the debts threaten to drown you,
there’s nothing left to do but
go.

But don’t creditors cross borders?
“It’s not worth the effort,” my brother
assures me, as images of an
unshaven debt collector in an
old Buick—who won’t ever give up,
because “it’s personal”—run through
my head. You always insisted on being
paid cash, Lightnin’, not trusting
the white-owned banks.
Which reminds me of a time
a couple of summers ago when I went
to Sonoma for his sixtieth birthday.
He pulled a wad of hundreds
from his jean pocket at the checkout
of the upscale grocery and flipped
through it like a slinky. I quietly
slipped my one credit card
back into my wallet.

Boastful boutiquey Sonoma, where
M.F. K. Fisher built her “Last House”
after a penurious life of winging it,
moving from husband to lover
and back again. She was genius at
sensualizing the ingenuity of people
doing whatever they must: A drifter
living on nothing but what could be
plucked off a California cliff,
the romance of masculine women
in kitchens butchering and kneading
and canning fruit in boomtowns
bordering the desert.

It’s a pleasure to stop striving.
To wake up in the middle of nowhere
with one of everything: one house, one
car, one cat, one man. And ever
since little Gubba dropped dead,
one brother.

There are memories and there
are books and movies. More
stories than there’s life left to live.
It feels good to sit and stare, to not work
all the time. Robert asks me
to help, to pull down the strategic
map, close my eyes and point: Mexico
or Maine. Hot or cold, here or
there.
It’s best to live in a place
you cannot boast of and which will
not break you. Someplace to
settle in with your solitude
and your woman beside you,
eat lettuces, drink moderately-
priced wine and hum, as the
yellow sun sets, the please-let-
them-forgive-my-debt blues.

To shuffle up the middle-class in me
I clamped my eyes on thick issues of Vogue,
nerves discomfited by my wondrous envy
of Stella Tennant’s androgyny. Brogue-
silent, her angular Scottish stare punked-out
the kilted sheep-herder look. What a life,
to be draped in oatmeal woolens and sport
upon a heathered hillock for lavish pelf.
Stella could have played the poet H. D.
had she decided to act, so tall, trim
and regal, an impossibly edgy
emblem of the imperially slim . . .

Stella married, had four kids, cherubs
Burberry-clad in the leggy garden
of her Borders estate, or in the bathtub
in a pic with their svelte and boyish mum.

It was her life I longed for when I felt glum
about my thighs, my childlessness, my small
dim house and clothes from T.J. Maxx. Her jaw,
a clock of possibilities and cool,
kept me always late and wanting. In awe
of what you cannot have or be, a fool
thing, I know. But soothing too. I liked it,
this glossy fashion flagellation. Yet
while I bemoan my life is not as grand,
Stella resolves to die by her own hand.

after E. A. Robinson’s “Richard Cory”

A life, integrated and pure,
without skeletons in the closet
needs no holstered silver-bullet-
shooting
Colt 45
from Rhode Island,

even when trekking through
Death Valley
or a dry arroyo, the raindrops
of a summer drencher
echoing upstream.

Just as I needed no weapon,
out vagabonding
on Orono’s
land-trust trails, composing poemlettes
for Heurtebise,
when
an eagle swooped away from me
at the outer meadow’s edge.

A feathered omen
of such proportions
not even war-addled
Afghanistan, or the interior
of Putin’s Russia—
where they poison
the underpants of political opponents—
could raise up
his like.

Go ahead, desert me
in the Sonora
with nothing but a cactus to drink from,
or in the scorched remains
of Paradise oppressed by the fires of
climate change,

let the sun burn rubber through what’s
left of the ozone
and tailgate me to the ends of the
earth, my love for
Heurtebise’s quick puns
and quicker tongue
won’t ever come to an end.

Poet, translator, and essayist Jennifer Moxley’s most recent collection is Druthers (Flood 2018). Her book The Open Secret (Flood 2014) won the 2015 William Carlos Williams award, and was a finalist for the Kingsley Tufts award. She is Professor of Poetry and Poetics at the University of Maine.