You: white Deborah Kerr singing
that song from the King and I—Thai kids
crowd in rings, to know you.

Drama: a bit too much for your husband
to let his wife fly off with a dark skinned man
to whom he hasn’t been properly introduced.

What sort of crank would write a song for his bride
after the divorce? No, it’s about me, not you. Said

the poet, who, from now on, would always refer to himself
in the third person, because that’s how his life

had become. A mysterious omniscient narrative voice
forcing him to wiggle his toes or scratch his left armpit—

not unlike Malte Laurids Brigge feeling gespenstisch.
Or is it more like Gregor Samsa in Die Verwandlung

being alienated in a Sartrean sense? Holy Crap!
There he goes again, making me search Google

after every seven or eight lines. This dude really needs
to get a life. Hey, is our professor torturing us

by assigning this book? I bet he’ll give the class
another pop quiz with sneaky questions like

“Who is the true speaker in the poem Epithalamion?”
Not funny, Carbó, you’re getting all these voices

confused in my head!—penetrating my skull
like those parasitic Cordyceps Fungi that attack ant

brains and shoot out a stem from their heads to mature
and spread more deadly mushrooms. The poet took

another drag from his cheap British cigarette, made sure
his line breaks were not limp. He got spooked

when he heard a woman’s voice on the radio “love life,
love music” announce the easy listening station tag line.

He thought, momentarily, that it was his ex-wife haunting him
for leaving her. The next day he stumbled onto

Johann Pachelbel’s Canon in D Major while surfing the web
and he was reacquainted with an instinct, no, emotion

that got all this poetry writing started. Divorce is not
the end of love. It’s a process of starting to fall out

of love, its miserable grip. This was the piece he picked
to be played at his wedding as his bride came down

the aisle. Okay, Carbó, that’s one hell of a caesura
you gave me. I listened to your reference and pictured

the bride walking in tune with the music. I thought
you’d never get to the intent of the Epithalamion.

The poet opened his pack of cigarettes, pressed

replay. He noticed the warning sign in large letters

“Smoking kills.” What do you think he did next?

THE NUMBER ONE SONG ON THE DAY I WAS BORN
WAS “OH, PRETTY WOMAN” BY ROY ORBISON

The parents that gave me up for adoption 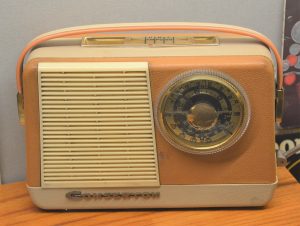 and permeated my newborn body.
I still remember the day Roy died on
December 6, 1988—waking up

to a loss of melody, the mellifluous
manner in which sounds used to drown me.
My college friend John Kintz and I raised

our beer mugs to honor the legend. John,
a proto-punk musician and a former drug
dealer who once showed me the scar

on his penis. We shared this loss
while the bartender tolled a brass bell
wailing “Orbison is dead, our music is dead!”

I could understand his hyperbole
to the bone. Loss is something you can’t rent
and it has no time limits—my birth

parents are most likely dead by now,
their effect on the 100 trillion cells on my body
as invisible as a lost radio signal.

My response to John’s penis was silence,
there was no connection there to hold
onto, or mouth a slippery reply.

So we went outside to smoke a joint
and talk about the pretty women
in our lucky, lucky lives.