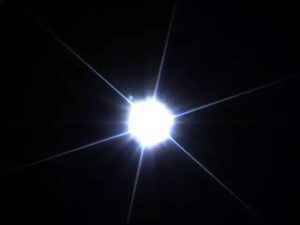 Your sister, the Dog Star, was the brightest.
You, the Pup, nobody even saw, until one night
in eighteen sixty-two, when a young man
with a telescope of his own devise looked up,
and there, where the wobble in your sister’s gait
suggested you might be, you were, a white dwarf.
Scientists, when they could read your temperature,
said a thimbleful of you must weigh a ton.
Fusion had to have ceased, they thought,
for you to be so dense. Though white hot
you were defunct at the core, already yellowing,
dead in other words. After the yellow,
they predicted, would come dull red, duller
and duller, until you disappeared. Your sister,
meanwhile, and the Sun would also be white
dwarves. Mercury, Venus, Earth, and the Moon,
before that, during the Sun’s red-giant phase,
would have been vaporized in the expanding
sphere and thrown off into nebulous plumes.