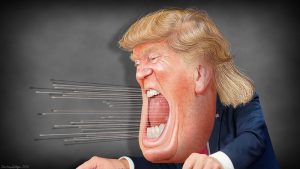 Note: When he sent us these “Trumpoems,” Joshua Weiner noted that “They are made from the President’s own words, mostly. They are terrible, but are they terrible enough for these times?”

If Ivanka weren’t my daughter,
you understand what I’m saying.
I’m not going to touch it.
That would be abuse.

If there’s something abused,
I will touch that.
Certain things, you know,
have been absolutely abused.

So that kind of stuff
I will absolutely touch.
But the concept of touching,
I’m not touching that.

My my my my music
makes me so hard.

And I think it’s very unfair.
You think that’s smart? It’s not.
You know why? It’s dead.
We cover it up beautifully.

It’s called phase one, phase two.
I call it “Deface the Nation.”
It’s just one of many things
that I can tell you also.

This was a small missile.
This was not a big missile.
It’s already been acclaimed
as being something very special.

Perhaps nothing has happened
and perhaps it has. Perhaps.
Excuse me. I have a problem.
I’d love to find out what happened.

I liked him a lot. I think he liked me.
We really have great chemistry.
And also, believe me, he will pay.
So, it’s a different kind of presidency.

But it’s a different kind of thing. You know?
Our military is so proud. And why?
They were not proud at all. Heads down.
Now they hold them high, so high!

One thing I can tell you about Jim Mattis.
He said, “I’ve never seen anything like this.”
Big it was, he had to sign it.
Bigot was the final ultimate.

I never knew how big it was.
You know the orders are so massive.
Everything now involves the heart.
This is death that is involved.

This is involving life and death
and so many things. And that’s a big story.
You live by the sword, you die by the sword,
to a certain extent. You know, it’s funny.

My base, which is a big base.
If you have a wall, it’s a real wall.
I don’t support or unsupport.
There is so many things no one writes about!

I’ve done a lot. More than anyone.
In other words, if you do your job,
but I accept that, then I watched him
and it was like he was never here.

I seem to get very high ratings.
I definitely. The highest in history
since the World Trade Center came down.
I don’t watch things that are unpleasant.

The one thing that I’ve learned to do
that I never thought I could do–
I have the ability not to watch.
What did I say? I never watch it.

I’ve developed an ability I never thought I had.
You know they tell me what’s going on.
But I’ve created something where people are watching.
But I don’t watch things. Just don’t watch.

These and other poems in the Trumpoems series by Joshua Weiner are now collected in a free virtual chapbook: http://dispatchespoetrywars.com/dispatches-news/2018/03/everything-good-trumpoems-joshua-weiner-2/