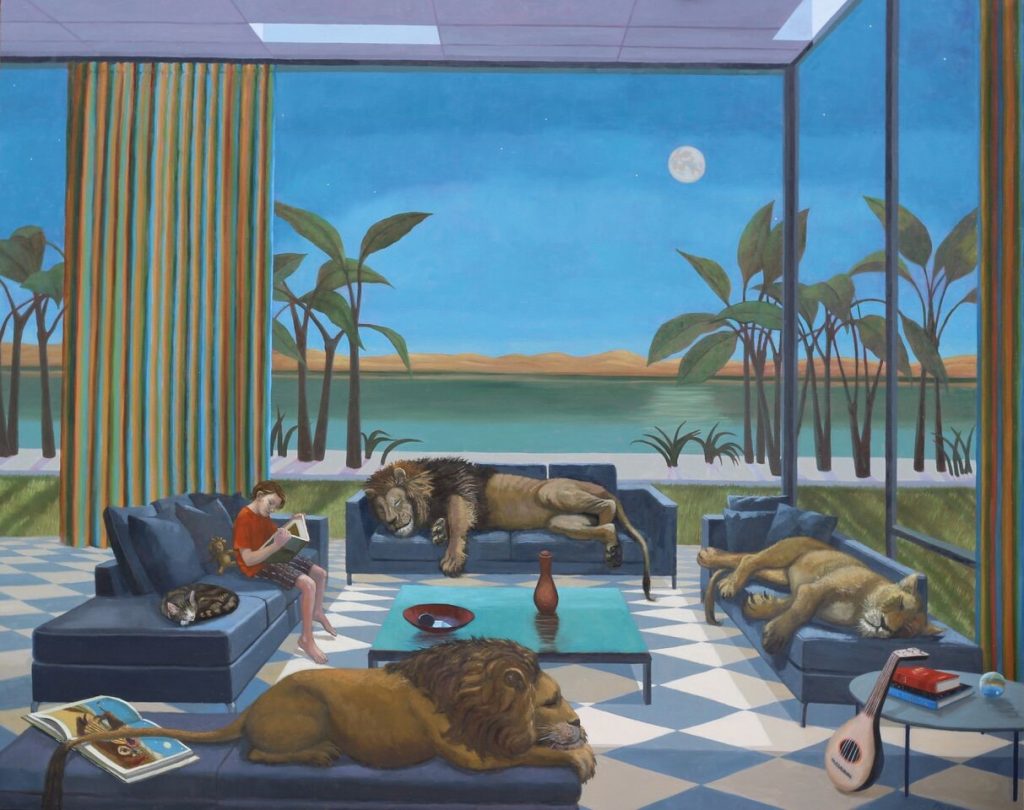 On “Lullaby for Lions”

The first kernel of an idea for this work happened on July 1, 2015, when I heard on the radio that Cecil the Lion had been shot after being lured from the sanctuary by an illegal party of big game hunters. I was in my car, and I remember thinking, thank god I wasn’t at that stage of my life when I was ferrying small children around in my minivan. One of them would certainly have heard the report, as children have finely tuned ears for things like that. And I would have had to come up with some explanation of why a man would want to shoot and kill such a beautiful, magnificent, unsuspecting living creature. I would not have had an explanation that would not destroy a child’s vision of humanity for the rest of their lives—at least not at that moment. I think I would have said something like, “Well, as a good human being, it is our responsibility to guard and protect beauty, creatures at risk, and things more vulnerable than ourselves.” I envisioned what a child would answer, what salve to soften the horrid, nightmarish image of poor Cecil dead on the ground with a poor excuse for a human standing over him, grinning victoriously?

The vision was of a little boy who had invited the lions into a safe place, a sanctuary where he could read them stories and sing them lullabies and let them sleep peacefully…not a worry in their lion hearts.

When I started doing sketches and research for the actual painting, I was drawn to Rousseau. I am in awe of his inventiveness and unencumbered capacity to create form and narrative without any responsibility to realism or naturalism. I have fallen in love with his tigers and lions and fantastic botanical forms. I borrowed his palette and landscape elements from “The Sleeping Gypsy” for the setting for “Lullaby for Lions.”

Other lions that I looked at are the beautiful sculptures outside the New York Public Library, named Patience and Fortitude.

And a tiny statue that was given to me as a gift. It sat like a muse on my painting table while I worked. Then there were my own cats who wander in and out of the studio and conveniently curl up at just the right moment.

I also fell in love with the paintings of lions by the French painter Aime Nicholas Morot (1850-1913), whose work I didn’t know until I started looking at lions. He could really paint lions.

Many thanks to the young boy next door who modeled for the little boy in the painting. At the time, his hair had grown beautifully long and unruly like a lion’s mane. When I told him he was to be reading to lions, he took that pose like he had read to lions every day of his life. Perhaps he has. I know for sure he will never, ever shoot one. 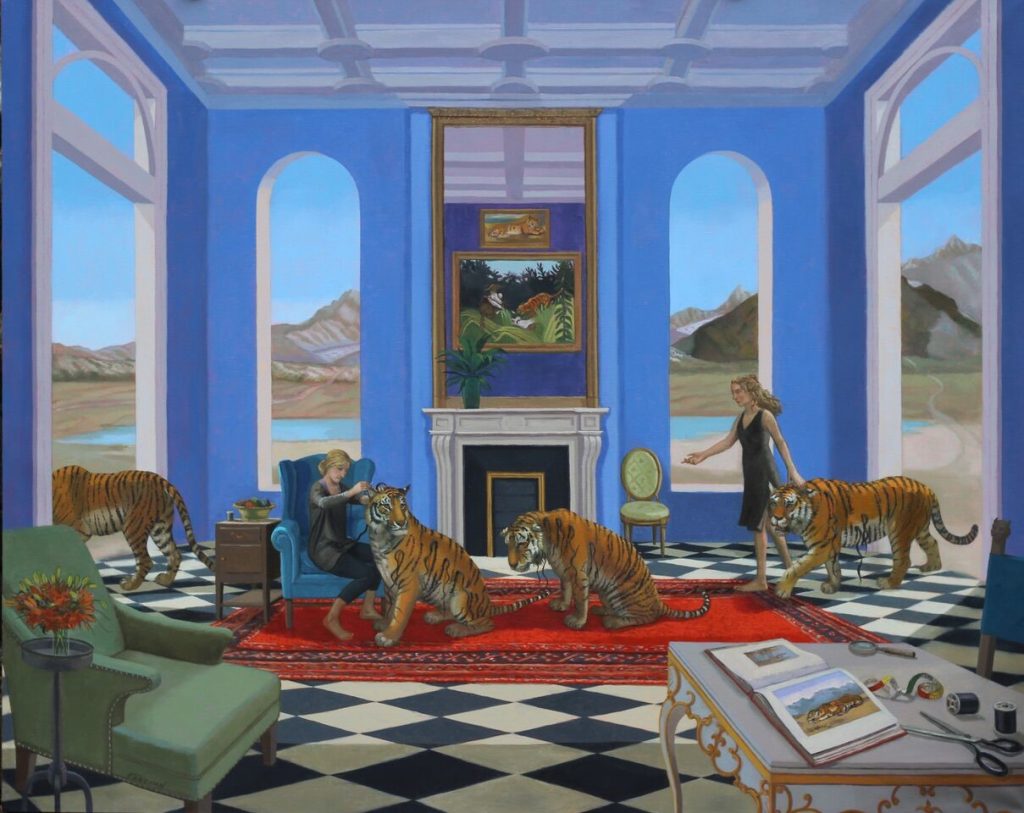 On “Mending the Tigers”

The idea for this work came from a short story by Aimee Bender called “Tiger Mending.” It is a mesmerizing story, so you should read it. It is in her collection called The Color Master.

I interpreted Bender’s story to have an environmental message. In my mind, the tigers were coming out of the mountains to get help from humans. Their stripes falling off are symbolic of the fragility of this great beast in the modern world. The young woman mending the tigers represents the mindfulness, inventiveness, and skill it is going to take for us, as the responsible party, to “mend” the environment. While she is the creative person and the talent who has the ability to do the mending, her sister, who is leading the tigers in, is the facilitator—the person with the mind and resourcefulness to make things happen. (Note that this is my interpretation. There are others out there that focus on the relationship between the sisters.)

While I was preparing to do this painting  I looked at lots of paintings throughout art history that were about tigers, both to see how they were handled by artists in terms of drawing and painting, but also to see their place in art. I went to the Barnes Foundation in Philadelphia to see Henri Rousseau’s “Scout Attacked by a Tiger.”  It is a brutal scene, but Rousseau’s vision is magical. They seem like mini-figurines in long grass. The tiger’s anatomy is a little odd, but it makes for an enchanting painting. I hope the tiger came out on top of the situation, but Rousseau keeps us guessing.

Eugene Delacroix was another great painter of tigers. I especially love his “Tiger Resting,” which I also include in “Mending the Tigers,” hanging above the Rousseau, and his beautiful watercolor and pencil study, simply called “Tiger.” It can be found in the Smithsonian National Gallery of Art.  I include it as a plate in the book pictured in the right foreground—as if the young woman is studying it to see how to stitch the stripes back on.