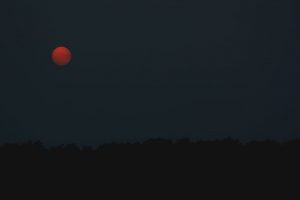 You Don’t Have to Be Tough All by Yourself, You Said

and if I returned the favor, it was much later. Or
I lied. At the airport, waiting for my turn to sleep. Like a leg
bone inside a grasshopper. In the selfie I sent, darkness

curtains one side of my head which hasn’t thought
of Christopher for years. Aside from his occasional Facebook
posts captioned #blessed below boys in blue

jerseys #despite the Canucks’ losing streak. The Rockies
look photoshopped, but not the beetlelike sacs
under his mother’s eyes. All seasons, petals by a jacuzzi. Cherry-

flavored hospital jellos on the lid of the grill. Unless
they’re margaritas, O, winking emoji #FUCKCANCERGOCHEMO!
I should’ve sent his mother a letter. Something about that year

everyone could see what was hidden under the oversized
t-shirts, and Chris carried my books between History, Biology,
Advanced Lit. Plotted with Mr. F to find me among Mrs. F’s

old maternity clothes something to wear for the prom. How
rotten the colors on those dresses. In open air the moth
holes like tiny kisses that year I wanted to

leave my life lipstick on the road. Chris-of-the-roses-in-his-chest
saying, You will be
a great mom. Where

is the ocean where the faces of glaciers fall apart. I wrote
a poem instead about the woman with red glasses who after a
Know-Your-Rights training gave me her Notice to

Appear stamped Department of Homeland Security. Nobody
wants to go home, Chris. Nobody wants their theory of the earth
proven. Because I did not believe in kindness, I did not have to see

I feel my love tug at me from the other side of a blue clarity.
I text him my face when I think it most
untouchable. WAKE UP. The marshaller is waving

her orange batons. Most days, a pilot
reads the signs and nobody dies.

Zuihitsu with Love for the Moon’s Failed Rebellion

You showed me a long, winding road that cut through a tapestry of frost. The refinery’s

writing letters and the workers with oil in their ears are now elsewhere, illusory, bouncing grandbabies on arthritic knees. Florida,

probably. I put my lipstick on before I looked

for the world. That room made of moon and metal guesses. The desk rain abandoned. Like your hand, Klingons are approaching

the home planet, resolved to defend their heat to no one. “We do not have the luxury of principles,” says Starfleet Admiral Cornwall. My principles

horizontally as frost would. I wanted to leave

the world racing with flies, a cord over the normal river, where one brother would squat to take a shit ten feet down from the other scrubbing his arm-

pits with ash. “That is all we have,” says Starfleet mutineer Michael Burnham, because she knows even

in Black Panther, it is nobility that wins the day. Who wouldn’t gladly

trade the frosty ballot box for a damp room with a beaded curtain and a $10 massage at any time of day on any corner of Denpasar’s streets. Effortless, unlike the striving

husband who drops her off by the lilied entrance because he doesn’t think women should drive. She steps out of her clothes in air black as a lily. Lies

face down, and within minutes, consciousness is a question of pressure. Where, how deep, how

close to bleed. “If you speak it means you remember,” writes Kimiko Hahn. After the footage ended, the refinery was pressurized

tundra. I am not a democracy. Or my mother in her intact stratosphere. My childhood friends,

long and moneyed, debate whether to cut one more fold or stab – to better shade the moon – another row of lashes, one by one, into the skin of their eyelids. The painful villa did not ask for

air conditioning because it had no walls. Prime altitude. Voices like tigers

crouched behind mahogany beams. I wept like a staircase, widening at the bottom for purely

aesthetic reasons. The lipstick was already on you. I marked you, THE WORLD, without

your consent. Morgana. Callisto. Koba. Killmonger. Are you

there. I reserve my love. For the antagonists whose pain is moonlight spilled on the dead factories. The speaker is linked to the writer by a tenuous string of spit. She hums

like a microwave, walking toward that pool of moon, where her father stands, the mouth in his face aglow. Her government, ready

for the rebellion to turn on itself. Accusation that looks like SLUT, but

the moon bottles it up. “I choose and cherish / all that will perish,” argues June Jordan. “The living deal.” From which there is no coming back. In Singapore,

several aisles in a single drug store are dedicated wholly to skin-bleaching products. The father suspects something. His wife has sold too many shoes. She keeps the most coveted pair – ivory – for herself. As is her way. She can’t even wear them, so broken is the skin of her soles

from years of walking barefoot on dung and crushed

brick on the way to and back from the market, defending her mother’s

little plastic bags of homemade soy sauce. In a rare season of certainty, I used the last of

my credit to visit an exploded planet. Pressure of Achillean magnitude pulverized debris to the fineness of an eyelash. “My normal

ended the second my parents put me on that ship,” says Supergirl to a wide-eyed Jimmy Olsen after punching the carburetor right out of a car. Normal is losing, then

losing some more. Your hand is being filled with the Holy Spirit, having

what others desire and you can’t escape. My mother carries her secret, useless

shoes everywhere. “Why do you eat so fast,” she chides. “Like Satan is right behind you.” The sun a leather

the slapping of knife on bread in the kitchen. My lipstick set to announce its last will and testament. On the lunar new year your hand weighs, I have no idea what. I wanted

the short-circuiting under your suit, the lying design, but couldn’t break out of the moonlight

my father fermented. Nearing climax, a door scorched like a word that remembers nothing. It is

snowing in my eyelashes. Which is to say, forgive me. I was born

a hammer tapping on a lock. The hammer did not
hope to open it. It just wanted to hear a song – any
song’s – primal, inexplicable

a machine to make climate change happen where white people don’t live,” says my Lyft driver. “And I’m puertorriqueño.” Don’t. My knee is

a child filled with worms. It would seem

the noblest of us have made of throne a mercy. Yielding to the rust-hearted, mongers and mongrels, not arms but panoramas of the believable world never

to be seen again. Beneath acres of frost, how moonlight –