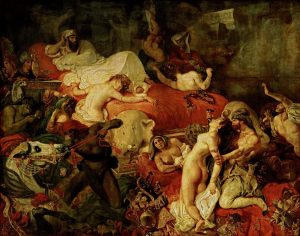 along suitors & the lyre-warp of her loom.

Screamin Menelaus [Flame-Haired] in Another Country

bleeped up big time, like some Joe from West
Virginia, Cleveland, marooned in Mortaritaville.
Outside an embassy. Kandahar. Near Aleppo.
He didn’t honor gods’ outlandish rules.

Was outlander. Yup, you’ve maybe been there, starving,
becalmed, interrogating [legally] a sexy
demigod re: what the SEAL-stink Old Man
wants. Wrestling from him reminders of the many

dead, plus news—a hostage [one more bro
beheaded] snuffed. Old Man orders pussy
-whipped Menelaus to ice his flesh-eating tears,
go back [we would] to the bad decision point.
Mass up Agamemnon’s in memoriam.
Make right sacrifice. Start [if we could] again.