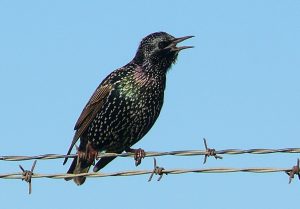 About 60 common starlings were released in 1890 into New York’s Central Park by Eugene Schieffelin. He was president of the American Acclimatization Society, which tried to introduce every bird species mentioned in the works of William Shakespeare into North America. See Steve Mirsky, “Shakespeare to Blame for Introduction of European Starlings to U.S.” Scientific American, 23 May 2008.
“The common starling is a noisy bird.” —Wikipedia.

Drilling the mulch with its yellow
prod of a beak, gimme that, gotcha
punk with short-tailed swagger and swank
an iridescent sheen on basic black
unctuous oils spilling the spectrum
in the right light more, ever more, over
the whole continent from first clawhold
just another New York City migrant—
a murmuration as American as you are,
chump, & don’t you forget it,
anything can make a nest, even trash, omni-
vore and scavenger, take that! $@#%~!?$
POW! plus a knack for bone-grinding sounds,
such pops & scrunches from its
masticating noise-maw you’d think
you’d got a glimpse into the raw where
speech come from, as buzz-sounds
break it down to pips and quawks
the tags & undulineaments of
all that’s new

“Give me your privileged, not poor,
Your neoliberals yearning to invest,
Entrepreneurs stuffed with d’or galore:
For us, elite and Christian now are best,
I lift my lamp beside our gold-plate door!”