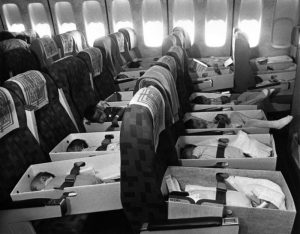 Letter to the Woman Who Carried Me on the Plane

You must have transported hundreds of small
squirming packages from one country to another, but
of course, you only remember me. I was delightful.
I didn’t holler the whole way on that long flight.
I didn’t let you sleep; refused the bottle.
Maybe you thought your job was holy—newly anointing
another white mother; this was beautiful to you, yes?
Or was it just another job, deliveries made from panting
& groping around in the dark, those hot sticky messes?
I can only imagine all those mothers waiting in all
those terminals, outstretched arms, fingers extended,
as you handed over baby after baby to home after home,
practicing how to re-create, family. Why even now
do I practice this insistence on beauty?

Now, where are you from?

The question is meant to spark an interesting conversation. Bald and graying retirees coming in to eat their three-course turkey dinners wonder about the story behind the face of the one who is serving them. Gravy on the side and cranberry sauce in ramekins. I like the word “ramekin.” Stacking plates, scraping them. The sound of cutlery plunking into the bus tub. “Cutlery” sounds more refined than “utensil.” The lies they think I tell: I am from Vermont / I am from the sea / I grew up here / I am from the stars / I am from Korea / I am not from Korea. / I am, I am, I.