Wanted: An End to Austerity — A New UK Citizen Canvasses for the Labour Party 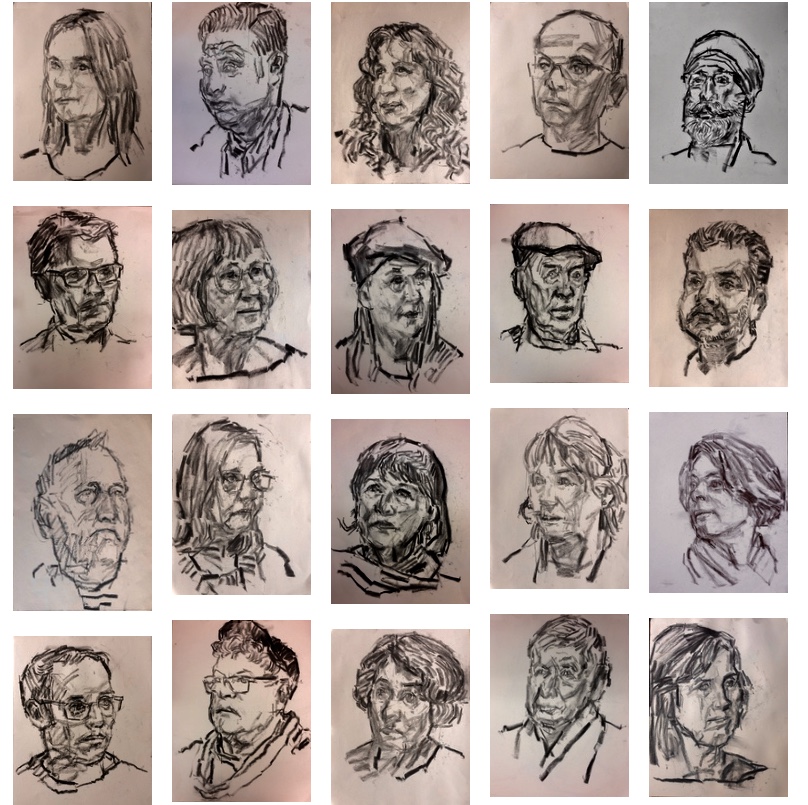 We were just leafletting. Even that felt good. It was cold but bright as we stepped into the first day of December, with Christmas wreaths adorning thresholds, doors wrapped like presents. A man on a ladder was hanging a Santa formed out of lights next to the reindeer outside his house, his daughter watching; a few doors down, two people painted a Christmas scene with glitter on the inside of their picture window. No tasteful white lights here. Britain was reminding me more than usual of the former factory town where I grew up in Connecticut, with its exuberant embrace of holiday cheer.

I needed a little cheer. I was on strike, taking part in an eight-day national action by lecturers in sixty universities in Britain, including Cambridge and Oxford. I don’t like being on strike, though it’s good to be reminded of my own working class background. I know one late uncle would be particularly proud of my striking – he turned down potential job promotions at a car parts manufacturer because he didn’t want to leave the union. Unlike many former workers in his retirement community, he never voted Republican.

Instead of picketing, I’m canvassing for the Labour party. In part, I don’t want to have to go on strike again. And, this is the first time I’m voting as a citizen in the UK. But these aren’t the only reasons. I pushed another leaflet through another mail slot – here, the color red, widely identified with Labour, feels appropriate.

Britain is already a different place than when I arrived in 2004. Though it never fit the tony cliché seen in movies like Notting Hill, I quickly became accustomed to the comforts here. Once I’d obtained a visa, I was able to work part-time without worrying about health care. There were few if any homeless on the street, unlike in the larger cities in America. I was amazed when university students complained of annual tuition fees of about £3000 – then, about $4,350.

But nine years of austerity under Conservative-led governments who used the banking crisis as an excuse for cutting public services has altered the landscape. Waiting lists for many procedures with the National Health Service are lengthening due to a combination of funding cuts and the threat of Brexit scaring away potential nurses and doctors from the EU. Homelessness is rising exponentially; according to Homeless Link, the number of people sleeping rough in England increased 264 percent between 2010 and 2018. These days, the scenes that come to mind might be from Trainspotting, or A Clockwork Orange, more dystopia than posh ideal.

Even as I write, this feels exaggerated, and yet, as I pass a desperately thin woman jittering up the path into the city centre, and I say “sorry” to a young man asking for a pound, the sky looks greyer, the houses closer together, the people more drawn and anxious.

I’ve worked at universities almost my entire time here, and we are feeling the cuts, too, since the coalition Conservative/Liberal Democrat government tripled tuition fees and cut funding for Humanities subjects. Our teaching loads are increasing, while support staff are being eliminated. Teaching vacancies are not being filled, giving us less time with each student and less time for the research they in part hired us to do. These days, I book vacation in order to work on my novel without interruption, even though my university is one of the better ones.

This election is critical: if the Conservatives win again, not only will Brexit go through, but the series of cuts to services the Tories have been enacting over the past nine years will continue for another five. I don’t want to see the results of that.

A few days later, I’m canvassing – knocking on doors, talking to potential voters and, when someone needs a bit more convincing, calling over Kevin Brennan, the incumbent Labour MP for whom I’m volunteering, who usually goes out canvassing with us. Brennan’s campaign aims to knock on every door in his constituency in Cardiff West. It’s not an unusual goal for Labour – and it’s a reason for Labour to hold out hope, even as the Conservatives remain 8 to 12 percentage points ahead three days before the election.

I knock and notice a flower pot with a sign for Santa to stop here for “Ellie and Evie.”  A young man answers, and, after I say why I’m knocking, he admits he doesn’t vote. It’s not the first time I’ve heard that today, and yet he seems less adamant about not voting than others I’ve talked to.

“Well, you’ve got Evie and Ellie to think about now,” I say brightly. “Labour is great on education. And Kevin is an excellent constituency MP. And hey – this is my first time voting here, too.” We talk a bit more, and I tell him to call the office if he has any questions. I leave a little more hopeful.

While Brennan is expected to win in his own constituency, the picture is not looking bright UK-wide for Labour. Brexit has mixed up the usual Labour/Tory support, with some traditional Labour voters potentially backing the Conservatives or the Brexit Party for reasons it’s difficult to tease out, reasons that will be familiar to Americans trying to figure out why working-class Democrats supported Trump: a lack of economic prospects for themselves, anti-immigration sentiment, the influence of right-wing news sources, and a bad combination of party leaders. In America, the wonky insider Hillary Clinton was perhaps the worst candidate to run against the populist Donald Trump. Here, it’s unfortunate that the awkward, sometimes peevish-sounding Jeremy Corbyn, despite leading Labour’s ambitious left-leaning platform, is running against the mini-Trump, Boris Johnson, who somehow bumbles and bombasts himself into a semblance of the common man.

As a former journalist, I am particularly critical of the BBC’s coverage of Johnson and Corbyn, which seems to question Labour harder than the Conservatives, even though Conservatives have been in control of the government. The BBC isn’t holding Johnson and his party accountable for the last nine years. Last week I started a petition to correct a small example of the problem. Though they call the Labour leader by his surname, “Corbyn,” BBC journalists routinely call Johnson by his first name “Boris,” like he’s a friend, or a circus clown, or a guy down the pub you know just enough to say “hello” to. Not a man with a serious reliability problem who wants to run the country for the next five years.

In Britain, that may matter even more than in the United States, because here, politics operate on a much smaller scale. Last week, I attended a fundraiser for Brennan at an Indian restaurant. Tickets were £15, including dinner, or about $20, and the night featured two girls, one playing the Welsh national anthem, imperfectly, on her violin. It was a jovial, friendly event, with British people of Bangladeshi, Indian, and Pakistani descent joining together to support the local Labour politician. At the end, they proudly announced they’d raised £872.59 for the candidate.

That’s all? For a candidate for Parliament, the equivalent of a member of Congress in the United States? People running for Congress spend on average nearly $800,000 on a campaign. The most Brennan is allowed to spend on his campaign is about £12,000.

These are the kind of things that are at stake here in Britain. It’s about scale, and it’s about money. It’s about capitalism not being allowed to run wild.

For instance, about two weeks ago, Corbyn released documents showing that the UK is already discussing changing the basis for configuring drug prices that American pharmaceutical companies charge the NHS, which would no doubt result in higher costs for the NHS. The NHS currently negotiates the prices of drugs, and drug prices in the UK are cheaper – the twenty best-selling drugs, for instance, are a third lower in cost than in the US, according to a study by Reuters. Documents released by Labour show the Conservatives have been talking to US trade representatives about eliminating the safeguards that keep these costs down, despite denials by the British health secretary that the NHS was under discussion.

My taxes contribute to the NHS – just as Americans’ insurance premiums pay for their insurance. But right now, I pay nothing for prescription drugs. I pay nothing to see my GP. When I was diagnosed with pneumonia in May, my GP saw me at about 11 a.m. that day, didn’t like my symptoms, sent me to the hospital where I was given blood tests and an x-ray. By 5 pm, I had a prescription for two antibiotics. Cost me nothing at the point of delivery.

In America, my friends just found out they no longer qualify for Obamacare and will be saddled with a $30,000 premium to pay next year. I don’t think Britain should risk moving toward any plan even remotely similar to that.

As I write this now, I’m back at work, ready to go to class in an hour, preparing for some twenty tutorials this week to make up for some of the time students missed during the strike. In Cardiff, volunteers for Brennan’s campaign will continue knocking on doors, talking to potential voters, collecting stories like this one:

Though it was the middle of the day, there was a party going on across the road. My partner, Paul, knocked on the door and was greeted by two immaculately dressed girls. When he asked to speak to their mother, they said their mother was at the party. He walked in, unsure what he’d find.

“Oh, Labour!” she exclaimed cheerily. “I’ll always vote Labour. They had a scheme that gave one of my girls a musical instrument, and lessons.”

As they chatted, he learned her daughter played the trombone.

“Trombone?” He laughed, delighted, glad he’d tracked her down. “Well, that must be difficult when she’s practicing.”

“Nope,” she said, “I’ve got it all sorted. We’ve got a caravan in the back of the garden, and she practices there.”

On Thursday, when I cast my first vote as a UK citizen in a UK General Election, using a pen and dropping the paper ballot into a cardboard box, I’ll be voting with those girls in mind.