WE FOLLOWED THE AMERICAN FLEEING, FLED 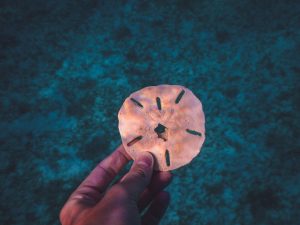 The ash sift settling on our cars and lawn
furniture, the towering gray cumulus clouds, the smoke

under the street lights,
the sun a small burnt orange

throbbing coal we left, drove our minivan like we could
leave it all, the Dixie, the Caldor, the River Complex

and the sea-scrubbed, poured-out sky
till we sunk in sand and clean sweet air —

moist, alive as living and our lungs
soothed beasts. It was like breathing

kindness. I opened the van door and gave it
to my children, the whistling air, flashing

trove—sea urchin’s thin skeletons—
they grabbed at them in the spume at their sun-browned feet, stacked

them in gritty piles to cart home, pelicans drilled
into the waves, a sea lion’s face popped up, unblinking eyes

black coins interrogating me and I knew
it was all still true.

That week The Times promised every summer hotter at least
till the boys are my age.

In fourth grade in Iowa, Holly Godwin brought sand dollars
from her summer trip west, first we in Dexfield Elementary had ever seen.

Porcelain wafers in her blue-tinged hands.
She said they had a cross in the middle and I always thought

they had a cross in the middle but now
I see it’s a flower. Petaloid according to Britannica,

each pricked aperture the sign
of one tubed foot for breathing.

Whether/how they breathed was not a thought
we had then. The hole at the center

of the flower, their tiny mouth. Holly shook it to hear
its rattle and showed one broken in half,

the jagged chambers spilled bits
she called doves, as if in multiples the Spirit

rested in her cross-hatched palm, crying
again listen to my beloved.

from Mount Saint Helens, boring except
the way she whispered

that strange calamitous name.
My boys gathered and piled the sand

dollars for an hour. They’d never
found so many–echinoderms

stripped of everything but
their last stony shape. We’d never find

them like that again, even if
we went back to the same beach

to the same spot the next day,
which we did, searching

in all the shimmering
tide, that moving border, that

Jenny Hykes Jiang’s poetry has appeared in literary journals including Little Patuxent Review, Arts & Letters, Caesura, Chestnut Review, Palette Poetry, and  Madison Review. Raised in rural Iowa, she has taught English as a Second Language in Asia and the U.S.A. Currently she lives with her husband and three sons in the Sacramento area.