We Value Your Memories 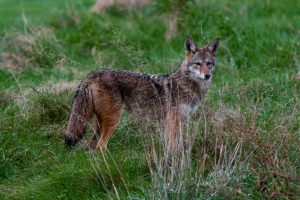 My wife has friended a coyote.

Facebook keeps sending me
messages from a slightly other world
where a blind guy like myself
jumps at the chance to buy expensive watches,
cheap car insurance and a surveillance system
for his cornfields.

It’s a real coyote, maybe more than one,
but there’s just the one profile. They say he lives
down by the river at the abandoned Ford plant.

Now my dead father-in-law
“wants to be friends.“ It’s true, he called me friend
when I took his hand,
one of those last days in comfort care,
before Shelley and I walked out
to the frozen parking lot. But it’s August now.
Time was, the dead kept to themselves on Facebook
unless it was someone’s birthday.

Once Shelley saw him out front. I always thought
coyotes would skulk, lurk in the shadows, prowl
at night, but there he was
trotting past the house and down the hill
on a bright Sunday morning, owning the sidewalk
like any citizen.