Where Is Our Spring? 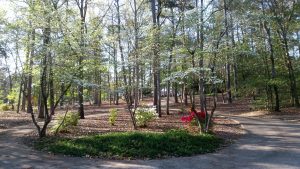 Each click was only a few minutes apart. Nothing had changed. But I still could not help myself from refreshing my computer screen. It was the John Hopkins COVID-19 Global Tracker, an interactive map that tracked the numbers of infection, death, and recovery. The number of infections, coded in red, was set in an overwhelming black backdrop, reminding me of a dark, violent scene from the Sin City.

If not for the chirping of a cardinal on a mimosa tree outside the window, or for a family of wild ducks swimming in a pond at my backyard, or for pockets of yellow pollen scattered on the water surface like defects on an otherwise perfect silk fabric of dark green, I would not believe today was the spring equinox.

Feeling hungry, I went to open the refrigerator and reached for a red-bean bun—my usual breakfast. There was only one left. The refrigerator was almost empty. I quickly took out the bun and shut the refrigerator. My right elbow hit the handle on the door of the freezer. I almost dropped the bun. I took a deep breath. Should I go to the H-mart this weekend? I cast a glance at a shopping list by the computer. It had been there for over a week. I still could not make up my mind.

I lived in a small town in North Carolina with a population of about 1,000. People here were friendly and respectful, although sometimes I was baffled by their Southern accent. Within a ten-mile radius of my house, there was a Piggly Wiggly, a drugstore, a post office, a family-owned Italian restaurant, and me, the only Chinese woman in town. Though the H-mart, the largest Asian store in the area, was sixty miles away from me, I did all my grocery shopping there.

My phone rang. It was Mama calling from my hometown on the outskirts of Shanghai. We had not seen each other for almost two years. Last year I did not have enough annual leave to take an international trip. Earlier this year, when the plague was ravaging China, my flight to Shanghai got cancelled. Recently, I had planned to reschedule my flight and go to see her during the time of the Tomb-sweeping Festival. As it was a holiday to visit one’s family gravesite, mother had coordinated with our relatives so that we could visit the site together and later have a family gathering. But once again, my trip was cancelled.

I pressed the answer button. Her forehead first turned up on the screen, then her head covered in white hair. Wearing a blue evening gown, she was sitting in bed, propped-up by pillows.

“Are you ok? What are you doing? Have you had breakfast yet? Drink a lot of water with herbs. Stay at home, don’t go out. If you have to go out, wear a mask.” She tended to transform a question of concern into a volley of imperative sentences, especially when she was anxious.

These days Mama had been following the news about the States. Two months ago, even when she was in the middle of the plague, she was not that intense. At that time, she occupied herself every day by doing Tai Chi, cleaning the house, cooking for the family, watching TV, and drinking a large flask of Chinese herbal tea. Every week, she walked to a nearby farmer’s market to buy food in her own disposable protective suit—a poncho, a mask, and a pair of latex gloves. Now when she went to the market, she only wore a mask.

“We were sent home yesterday afternoon.” I broke the news to calm her down. “We start to work from home today.”

“I can try to find masks here and send them to you. Does the mail still work there? Do people still work out there? Can you get them?” With a litany of questions, her image on the screen swayed. “People here wear masks anywhere, even when hiking in a hill. Don’t listen to the media. Wear a mask wherever you go, especially going to the H-mart.” She ended her speech on a decisive note.

She knew I was a regular of the H-mart. I liked their seasonal fruit and vegetables: golden kiwi fruit in summer, Korean pears in fall, and Vietnamese mangos in winter. Spring was a season of abundance. Bamboo shoots were among my favorites as they could be prepared in different ways, braised, sautéed, stir-fried, salted, dried, or even pickled. They were usually on market in early April around the Tomb-sweeping Festival.

“Mama, no one here wears a mask unless one is sick, or works in a hospital,” I said, trying to sound as much assured as I could. Every day I read news of Asians wearing masks being harassed or attacked in public places.

“But a lot of people do not know they are sick. Some infected people show no symptoms. Just be cautious. Stay away from the crowd.”

“Well, that’s why you need to be more cautious. You had asthma when you were a baby. It often attacked you in the depth of night. I took you to see so many doctors. Finally you grew out of it in your adolescence. But never drop off your guard,” she said. “It is a bad time to get sick.”

I clicked the refresh. It was buffering. The internet was slow.

“Do you have enough food in the freezer?”
“Yes, plenty. I have two packages of red-bean buns, a box of Korean pancakes, two yellow croaker fish, one pound of shrimp, three packages of ground pork, and two packages of wonton wrappers in my freezer.” I read the shopping list aloud.

She chuckled again. I felt relieved with her blessing. But I was still deciding. With the “Chinese virus” rhetoric going around in the country, an Asian market could be a soft target of hate crime. The Pittsburgh synagogue massacre flashed across my mind.

“In a couple of weeks, you can make the bamboo shoot soup with picked pork. It is good for your health.” Mama believed in the healing power of fresh seasonal food. I grew up having her bamboo shoot soup in spring.

“Yes, spring…is here,” I mumbled. Where is my spring? Where is our spring?

“It is late here. I want to sleep. Talk to you tomorrow.”

I put down the phone. The screen was still buffering…

Noticing yellow pollen here and there on the screen, I picked a Skillcraft wipe and started to clean it. Suddenly the numbers of total confirmed infections and deaths jumped up in front of my eyes. I was startled. They were much higher than a moment ago.

I wiped the screen with all my strength. Before long, the screen was clean, but the numbers stayed like bloodstains. They refused to be erased.

This spring, there will be a lot of new tombs to sweep.

I picked up the shopping list and tore it into pieces.

Hopefully next spring I will have Mama’s fresh bamboo soup.

Qian Zhang is a translator and a bi-lingual writer. Before she moved to the United States, she was a reporter for China Daily, China’s biggest English-language newspaper. She earned a PhD in Communication from the University of Pittsburgh, an M.A. degree in Dramatic Literature from Shanghai Theatre Academy, and a B.A. degree in English Literature from the Shanghai International Studies University. Her doctoral dissertation, entitled “American Silent Films in 1920s Shanghai,” examined the production, distribution, exhibition, and reception of American silent films in modern China. In 2007, she was awarded “Andrew Mellon Research Fellowship” for her dissertation. She translates articles and documents from Chinese to English and vice versa. Currently, she is revising her novel, “Tea Time with Superman.” “A Cloud like a Person Standing Upside Down” is her first published short story.