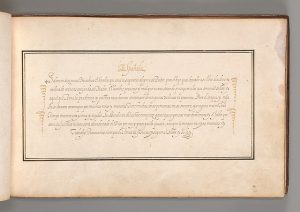 I am reading about a 400-year-old document found in a gap
in the buttocks of a statue of Jesus in the Cathedral of Burgos
when restorers removed a piece of fabric used to cover Christ’s behind
when K. says she is perplexed by her extreme repulsion to her pre-adolescent son.

He “accidentally” cupped and squeezed her breast.
She screamed at him and pushed him. I tell her that once I
involuntarily (not-involuntarily) hit my child, pushing her hand away
from some-part-I’ve-forgotten-which of my body. The world is a weird place:

you never know how other people interpret your actions.
Better my kid learn that now. But all this time, I’ve been thinking
of the two pages written in careful calligraphy, with which I’ve casually
covered K.’s breast, like that sheer paper a nurse will place over your body before a pap

smear, because Jesus, if he is anything, isn’t he the word
made flesh, so it makes sense that my orifices and K.’s protrusions
are kind of like 17th century note written in calligraphy by a priest and stuck up the Savior’s
backside in the Cathedral of Burgos, and that, when touched the right way, could reveal

time capsules of hurt deposited by those who came
before us. Because it felt so good, not to apologize
to my daughter. Although, in the priest Joaquin Minguez’s case,
it was a pleasure chest. I don’t remember which particular manuscript

my daughter had pulled out of me that day.
But I also remember feeling relieved that it was gone.
And if someone ever does it to you, you do to them exactly what I did to you
right now, I said. Here is a pen and ink and a crevice. You know what I mean.